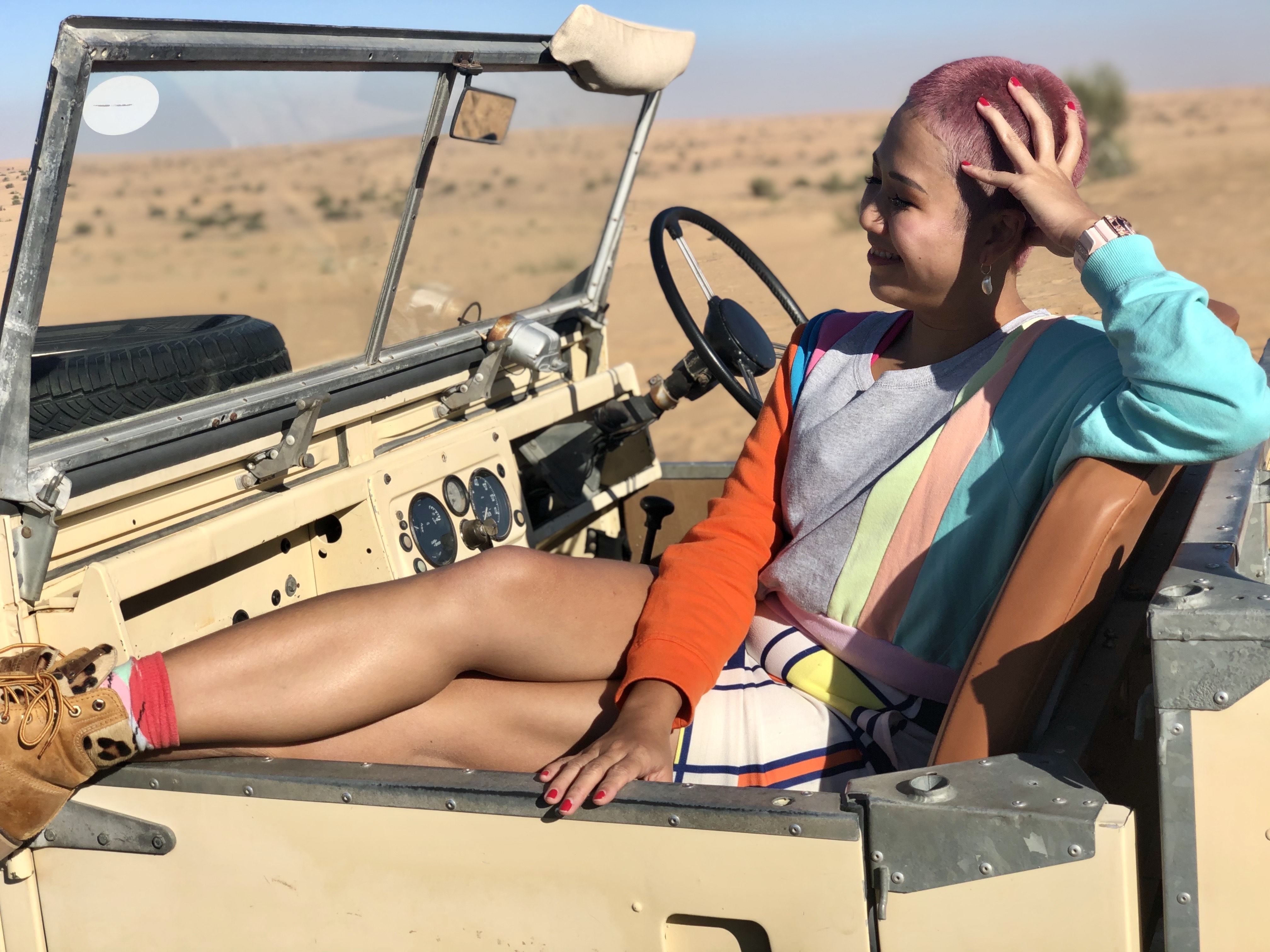 Janiqueel and a falcon have a desert experience to remember

The balloon seems to stand still in the air while the earth flies past underneath.

Chilly early in the morning and so very dark, the desert waited while I dressed and peeked out of my hotel window. I was in Dubai! I was preparing to ride a hot air balloon high across the Arabian desert sands while the sun majestically rose. Just another day in the life of a globe-trotting blogster.

No. This was a very special experience on a very special day. The massive jets of flame roared to life and what had been a massive sheet of rumpled fabric began to quiver and shake off the morning’s torpor as it filled with hot air and took on its characteristic shape. Once fully inflated and tethered to the ground, the craft struggled against the ropes that kept it earthbound.  It was ready to float and so were my fifteen companions and I were ready, as well, if a touch trepidatious at the thought of floating unbound above this strange terrain.

Calmed by an approachable captain and competent crew, we climbed aboard assured that our ride was well-attended by experts. Buoyed by hot air from roaring jets of flame, our draft slowly rose from the desert floor. As it rose, so did the sun presaged by a sliver of orange-red floating, like we, above the dimpled sands. Oh, what a sight! I pinched myself to be sure I was awake and not dreaming. I was, but this was dream flight, nonetheless.

Once aloft above the desert now turning tan and taupe we busied ourselves exchanging oohs and ahhs. It was time now for the falconer aboard to release his charge, a sleek “dapple-dawn-drawn Falcon” sternly determined to fly once free from his jess. Away from our gondola proud raptor soared. Free to find another independent life, the falcon was always attentive to the heavily-gloved handler who whistled at his charge. Round and round it flew. We watched with wonder and appreciation for the wonder of flight – the birds and ours. Small wonder that the poet, Gerard Manley Hopkins, chose to immortalize the winged creature in verse:

I caught this morning morning’s minion, king-dom
of daylight’s dauphin, dapple-dawn-drawn Falcon, in his riding
Of the rolling level underneath him steady air, and striding
High there, how he rung upon the rein of a wimpling wing
In his ecstasy! then off, off forth on swing,
As a skate’s heel sweeps smooth on a bow-bend: the hurl and gliding
Rebuffed the big wind. My heart in hiding
Stirred for a bird, – the achieve of, the mastery of the thing!
The Windhover (1877)

We fancied that we, like or winged companion, had become citizens of a higher realm but, alas, it was time to return to earth. The landing was as exciting as the launch. Delicately controlling the heat jets, the crew set us down firmly and safely on the ground. With handshakes and backslaps all around, we felt like the first astronauts returning from orbit.

For me, it was time to grab a crewmember, hand him my phone so he could take photos of me as I posed by and on the classic Land Rover. In my multi-colored top, Mondrian-inspired skirt, and Panama Jack boots, I may not have been a typical desert explorer. I was a typical desert trend-setter on earth and above.