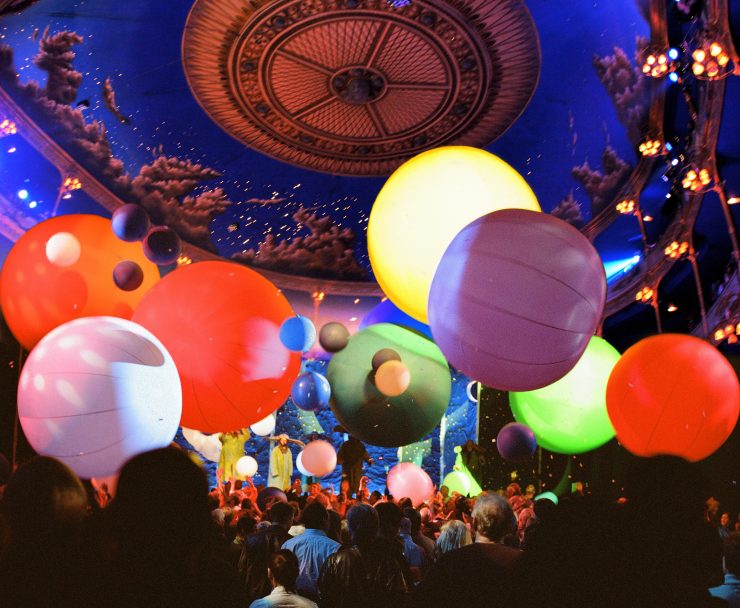 TO STORM BACK TO SINGAPORE!
Internationally acclaimed show arrives at Sands Theatre to create a blizzard of joy

“Snowshow is to clowning what Cirque du Soleil is to circus. Slavaʼs Snowshow is as theatrical asit is simple, as involving as it is inspiring.”

The multi-award-winning international sensation Slava’s Snowshow will return to Sands Theatre from 2 November 2022. Fans can anticipate Slava’s Snowshow’s joyous dream-like world that will touch their hearts and funny bone, culminating in a breathtaking blizzard that has them ankle-deep in snow. The show was last staged in Singapore in 2012.

“If thereʼs only one show you get to this year, make it Slavaʼs Snowshow and take the whole family.”

Presented by Asia Pacificʼs leading live entertainment company Base Entertainment Asia, Slava’s Snowshow is a timeless and universal theatrical poetic spectacle that audiences and critics alike have been enchanted with since 1993. Since its debut in 2004, the show has featured thousands of performances, and entertained millions across nationalities, genders and ages, in places such as New York, London, Los Angeles, Paris, Rome, Hong Kong, Sydney, Rio de Janeiro and Moscow. A genre unto itself, it remains as spontaneous and magical as the very first day it was performed.

Slava’s Snowshow brilliantly creates a world of wonderment and fantasy that transports the audience to a joyous dream-like place where a bed becomes a boat in a storm-tossed sea, a woman wrapped in cellophane becomes flowers in a vase, and a child walks in amazement inside a bubble. Other iconic scenes include Slava boarding a train and transforming into the train, complete with a chimney-pot hat that billows smoke, and a web of unspun cotton that envelopes the audience. In the breathtaking finale, a letter is transformed into a snowstorm that whirls around the auditorium, snowflakes and later into a snowstorm which whirls around the auditorium, leaving the audience ankle-deep in snow.

“A truly unmistakably unique and unmissable theatrical feast; this ensemble of extraordinary clowns combine comedy and poignancy with stunning spectacle and breathtaking images”.

Slava Polunin, who has been praised as the best clown in the world by The Times in London, created the Snowshow following his sensational performance as part of Cirque du Soleilʼs Alegria. Taking inspiration from artists such as Charlie Chaplin, Marcel Marceau and Leonid Engibarov, he and his company of clowns have brought clowning out of the world of circus and into the theatre.

A fusion of traditional and contemporary theatrical clowning arts, Slava’s Snowshow has garnered worldwide popular and critical acclaim, as well as a growing number of awards. The showʼs notable achievements include the Drama Desk Award for Unique Theatrical Experience (2005) and a nomination for the Tony Award for Best Special Theatrical Event (2009) in the USA, the Olivier Award for Best Entertainment (1998) and the Time Out Award (1994) in the UK, and the Helpmann Award for Best Visual or Physical Theatre (2000) in Australia. The show has also been lauded as “a theatre classic of the 20th century” by The Times in London.

“The single most beautiful thing I have ever seen in a theatre in my life.”

A wordless show that speaks a universal language, Slava’s Snowshow is a clown masterpiece that families, lovers and joy seekers all around the world can enjoy.

“Slavaʼs Snowshow touches the heart as well as the funny bone. Full of laughter and joy it is a thing of rare theatrical beauty not to be missed”.

PRESENTED BY:
BASE ENTERTAINMENT