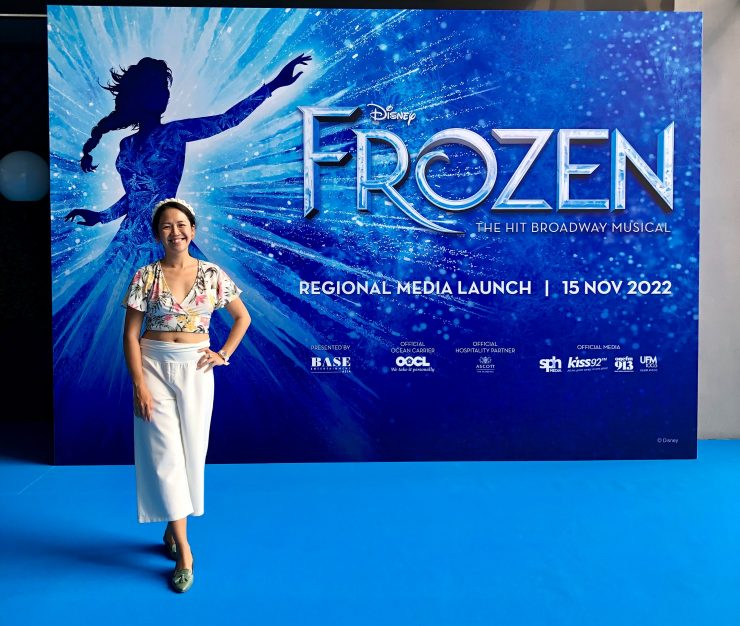 We only have each other. What are we gonna do?”

Few experiences can match the excitement of a big hit musical live on stage. Remember the colour, intrigue, and spectacle of Disney musicals at Marina Bay Sands in 2018 & 2019 – Aladdin and The Lion King? Now, after a long winter of health restrictions and COVID restrictions, comes a brand new production of an international hit movie, FROZEN, to thrill, delight, and inspire new and returning audiences with a marvellous production of a wonderful story.

Based on mythology and inspired by modern twists and turns, the story of FROZEN  is the story of ANNA, a proud and capable young woman of the North and the mountaineer, Kristoff who has a reindeer as a sidekick. Together they join their capabilities on a mythic journey to break the icy spell of Anna’s sister, the Snow Queen. As well as joining mystical trolls, a comedian, and plenty of magic and thrills, Anna and Kristoff encounter a host of characters and the realistic experience of how life works when the land and rivers are frozen and life seems to have ceased. It’s a race against time and the elements as the two heroes try to break the spell of the Snow Queen.

Of course, the relationship between Kristoff and Anna is important to the story, the new production, however, gives more weight to the story of the sisters, Elsa and Anna and the sisterly bond they strengthen through the tribulations of the musical. Featuring twelve songs that were featured in the film, but were originally written for the stage. This is a full-blown production worthy of Broadway or the West End here in Singapore for its only Southeast Asian venue. The production is as exciting as the play itself!

Presented in Singapore under the auspices of Base Entertainment, Frozen will have its run here in February. As part of the Tremendous Entertainment Group, Base has been bringing entertainment and enlightenment to the Asia-Pacific region for years. Making its home in the magnificent Sands Theatre at Marina Bay Sands, the international production team has highlighted such diverse entertainments as ballet, classical music, illusionists, live concerts, comedy, circuses, exhibitions and special speakers. The variety of venues and performances gives evidence to Base Entertainment’s commitment to providing its audiences with the best of worldwide shows, concerts, and special events. Like Frozen, many of the events are family-oriented. Imagine (for that’s the keyword here) the delight of youngsters as they relate to the characters in a setting far removed from our Garden City.

Confronting the age-old stereotypes of princesses who need the help of “big strong men” to help them out of the snowy labyrinths of a world frozen in time and space, and empowered by their own strengths, a bond forms between the sisters as their journey unfolds, Anna and Elsa are exemplars of determination and gallantry often not assigned to women characters. More than a seat-of-your-pants journey, Frozen is a lesson to all, but especially young women and men that strength of character is a part of everyone’s internal attributes. That said, remember that any age can enjoy the unique take on traditional plot formulas.

For an evening or afternoon is a place far, far away and far, far, unlike the tropics take a deep breath and plunge into the FROZEN world of Elsa and Anna and all the people and mythological beings that they encounter on their quest.