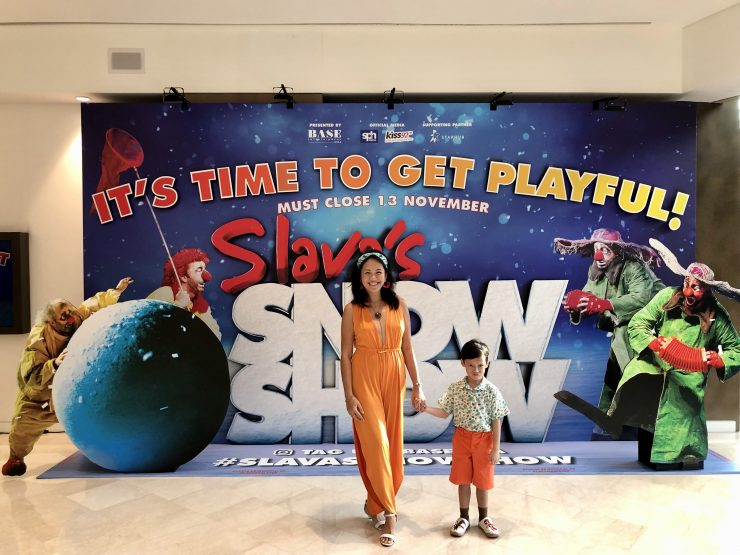 Snowflakes are one of nature’s most fragile things, but just look at what they can do when they stick together.

Maybe you’ve never seen snow. You know what it’s all about, though, right? You’ve imagined what it would be like to watch it transform the scene into a soft white dreamscape. Let your imagination run wild. In Slava’s Snowshow you’ll see the magic that snow produces AND – you’ll see a man (an extraordinary man) transform into a boat on a stormy sea, then into a train with smoke billowing from his chimney-pot hat; you’ll watch a woman become a vase of flowers; you’ll witness a child walking in a bubble; you’ll sit in the middle of a raging snowstorm as you watch the fluffy white stuff pile up on the theatre floor. Welcome to Slava’s dream world of SNOW!

Slava is at the centre of a quirky clown ensemble that gambols through a fantastic world of make-believe. You’ll be tempted to wear your puffiest jacket to the show, but (spoiler alert) the snow at the Sands theatre is made from confettis. Snow in Singapore. Can you imagine?

Created by Slava Polunin, and premiered in Cirque du Soleilʼs, Alegria, the show has garnered theatrical awards and awards nominations like a Drama Desk award for Unique Theatrical Experience, a Tony Award for Best Special Theatrical Event, the Time Out Award in the U.K., the Helpmann Award for Best Visual or Physical Theatre (2000) in Australia.

The show has also been lauded as “a theatre classic of the 20th century” by The Times in London. Convinced? At the very least, you can don a mid-weight jumper and pretend – because pretending is the life force propelling Slava, his clown friends, and the enchantment of SLAVA’S SNOWSHOW. If you have the chance, take a kid or two and see a brand-new world through their eyes. It’s a world without words, a world seen through amazing stage effects, physical feats, and corny costumes. It’s a world you won’t soon forget, even if you step out of the theatre into a tropical world.

…ONE DAY I realised that I wanted to create a show that would take us back to our childhood dreams; A show which would help spectators be released from the jail of adulthood and rediscover their forgotten childhood.

Reminiscent of tragicomic dramas like “Waiting for Godot” or “The Cherry Orchard”, “Slava’s Snowshow” blends life’s dramas with the polar (pardon the pun!) opposite: life’s fun and funniness. Should you find yourself in the mood for some serious foolishness, the Snowshow may be just what you’re looking for. Not in the mood for foolishness?

Slava’s Snowshow will bring you there.