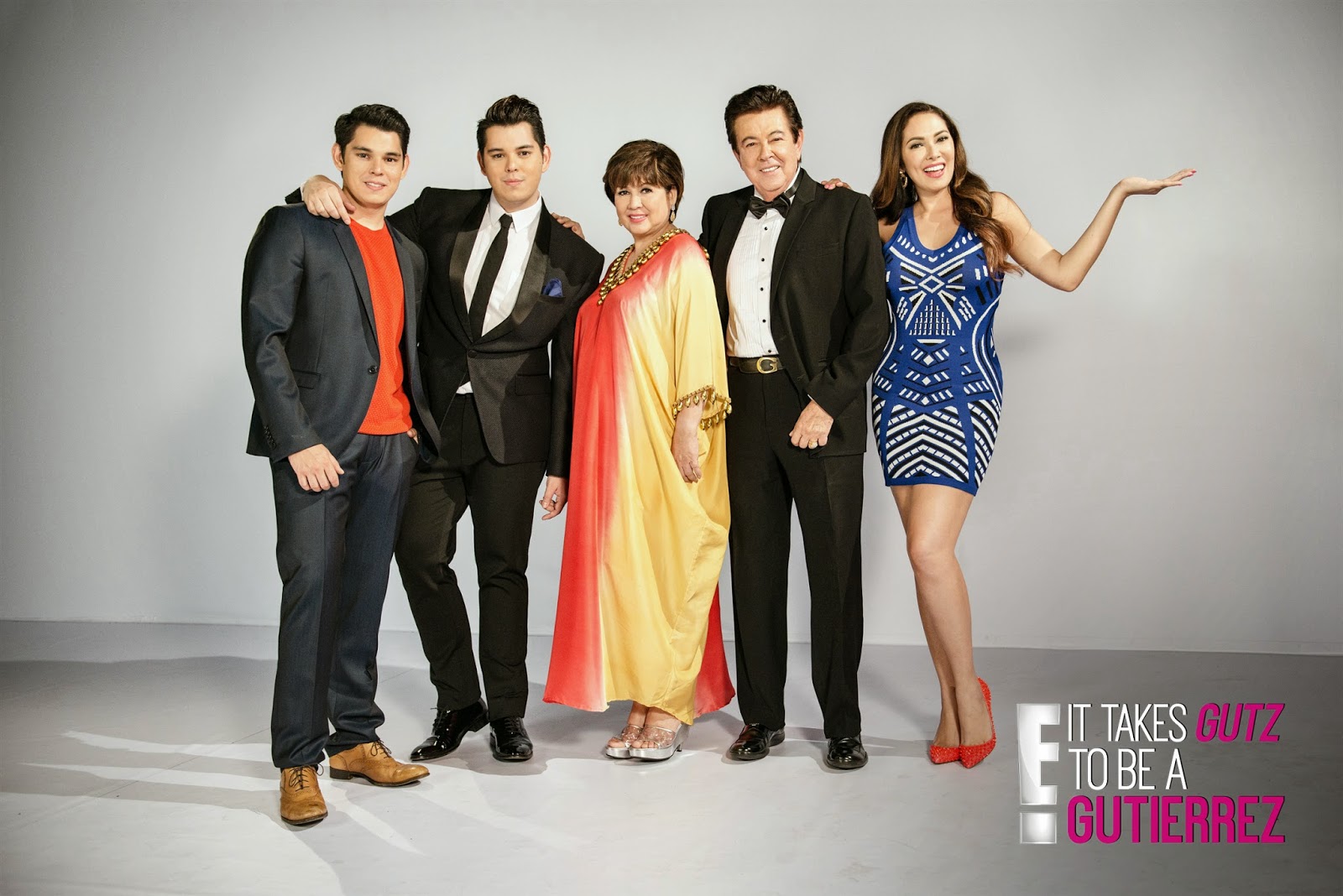 One of the Philippines’ most adored and talked about showbiz families – The Gutierrez – will be moving into their new home on E! from Sunday 1 June 2014 at 9pm (SG) with the sizzling six-episode reality series It Takes GUTZ To Be A Gutierrez.

As the global destination for ‘Pop of Culture’ and the renowned leader in entertainment news, the series marks E!’s first foray into original Asian reality programming and continued commitment to shine the spotlight on local Asian personalities and celebrities.
“As the home of the most topical pop culture buzz on celebrities, daily entertainment news and live red carpet coverage, E! is the perfect fit for a no-holds-barred series on the Gutierrez Family,” commented Christine Fellowes, Managing Director, Asia Pacific, Universal Networks International. “We are delighted that they are opening up their lives and that we are able to bring this locally relevant content to our E! audience in the Philippines.”
Produced by Philippine media powerhouse One Mega Group’s TV100, the series gives viewers an unfiltered access into the dramatic lives of this one-of-a-kind family – power couple Eddie and Annabelle and their children, former beauty queen Ruffa, fashionista Raymond and screen superstar Richard – as they show South East Asia just how much It Takes GUTZ To Be A Gutierrez.
Michael Carandang, Business Unit Head of One Mega Group’s TV100 said, “This is what I call a
“Dream Project.” First of all, we’re making entertainment history. “It Takes Gutz to be a Gutierrez” is the first of its kind in the Philippines and in Asia. Second, I’ve been a fan of both E!, since I worked in Hollywood, and the Gutierrez Family, since I’m a fan of Philippine Showbiz. For One Mega Group and TV100 to be part of this exciting new show is definitely a dream come true. This is a match made in red carpet heaven!”
It Takes GUTZ To Be A Gutierrez premieres 1 June, Sundays at 9pm (SG) on E! (Starhub Cable TV Channel 441). 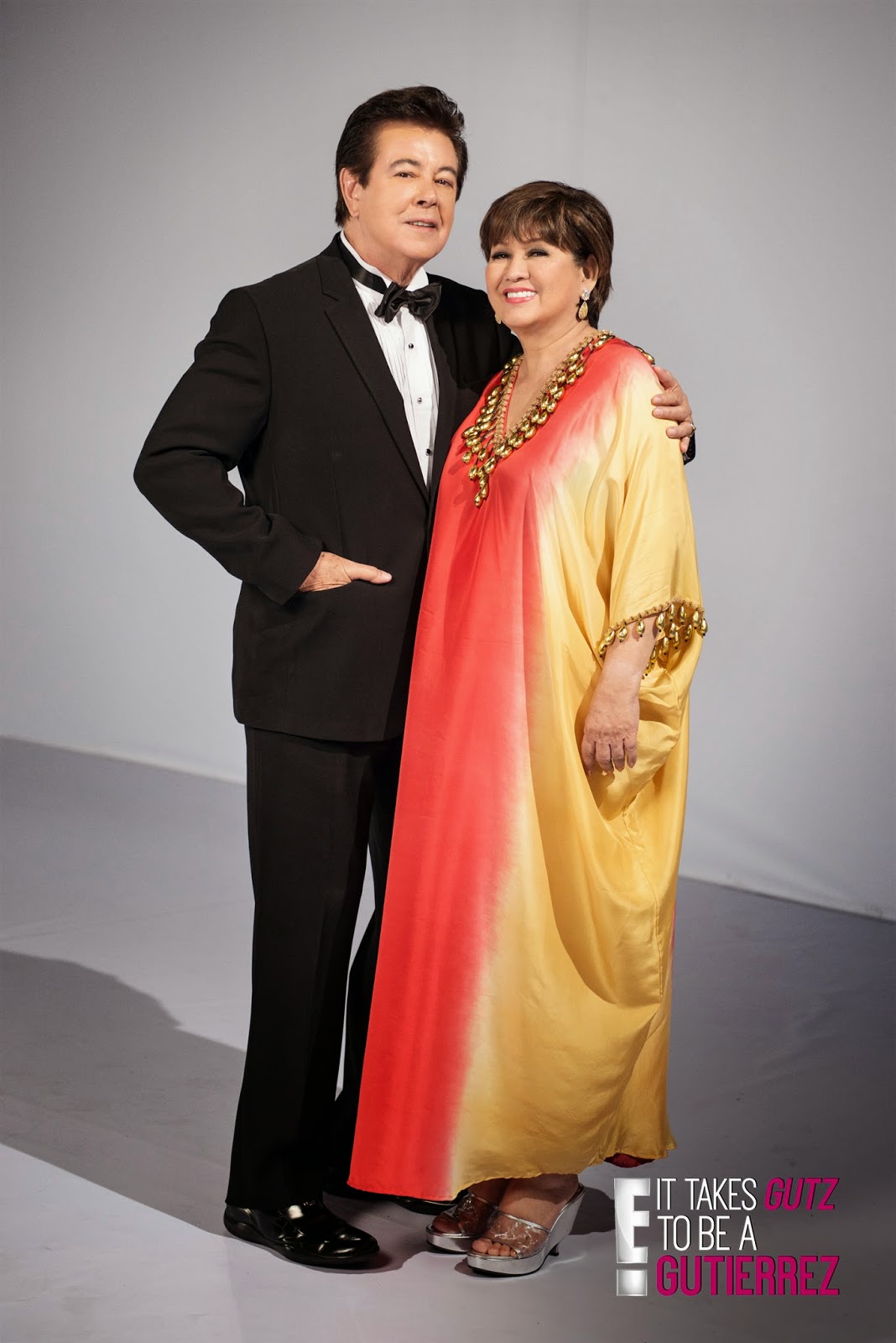 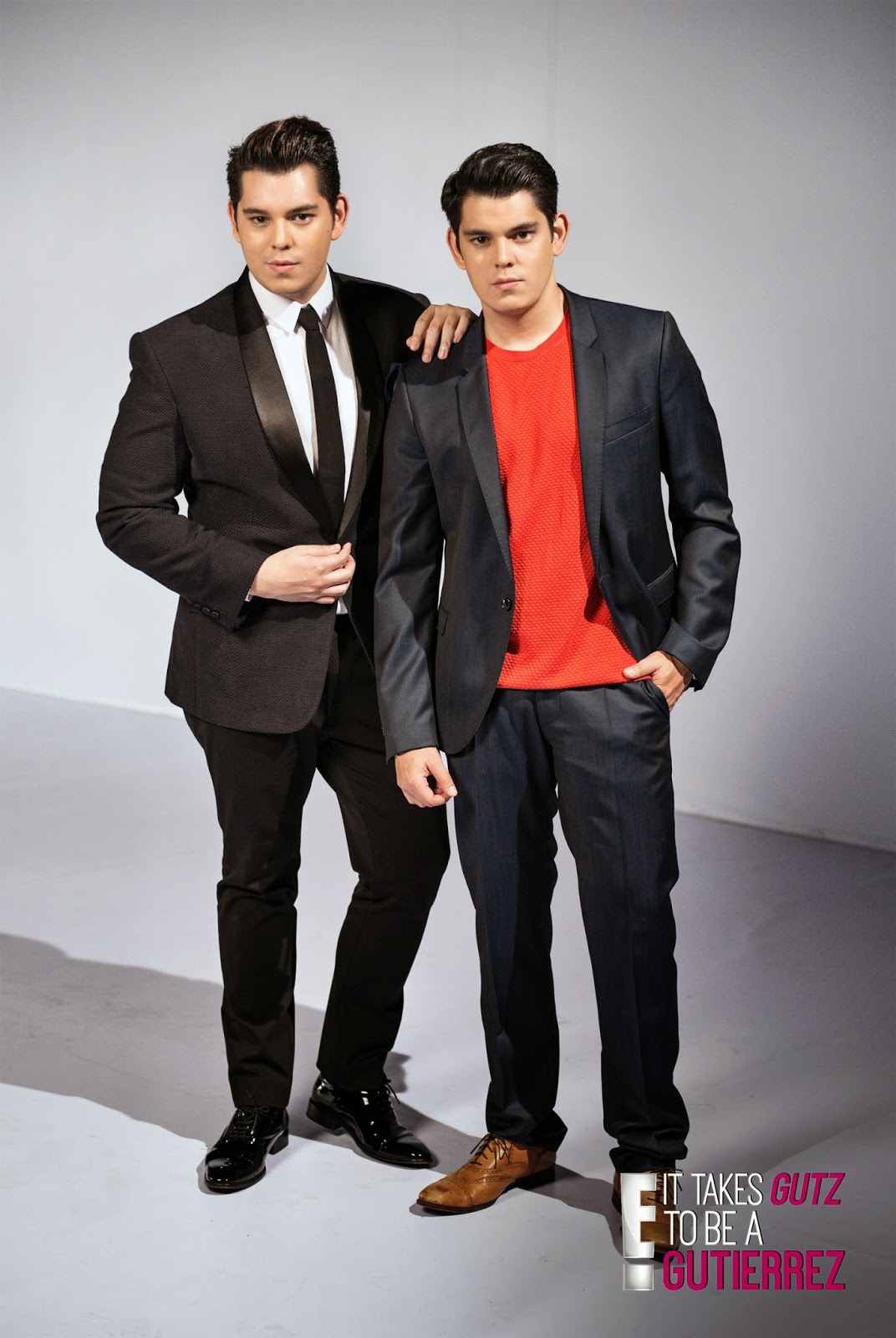 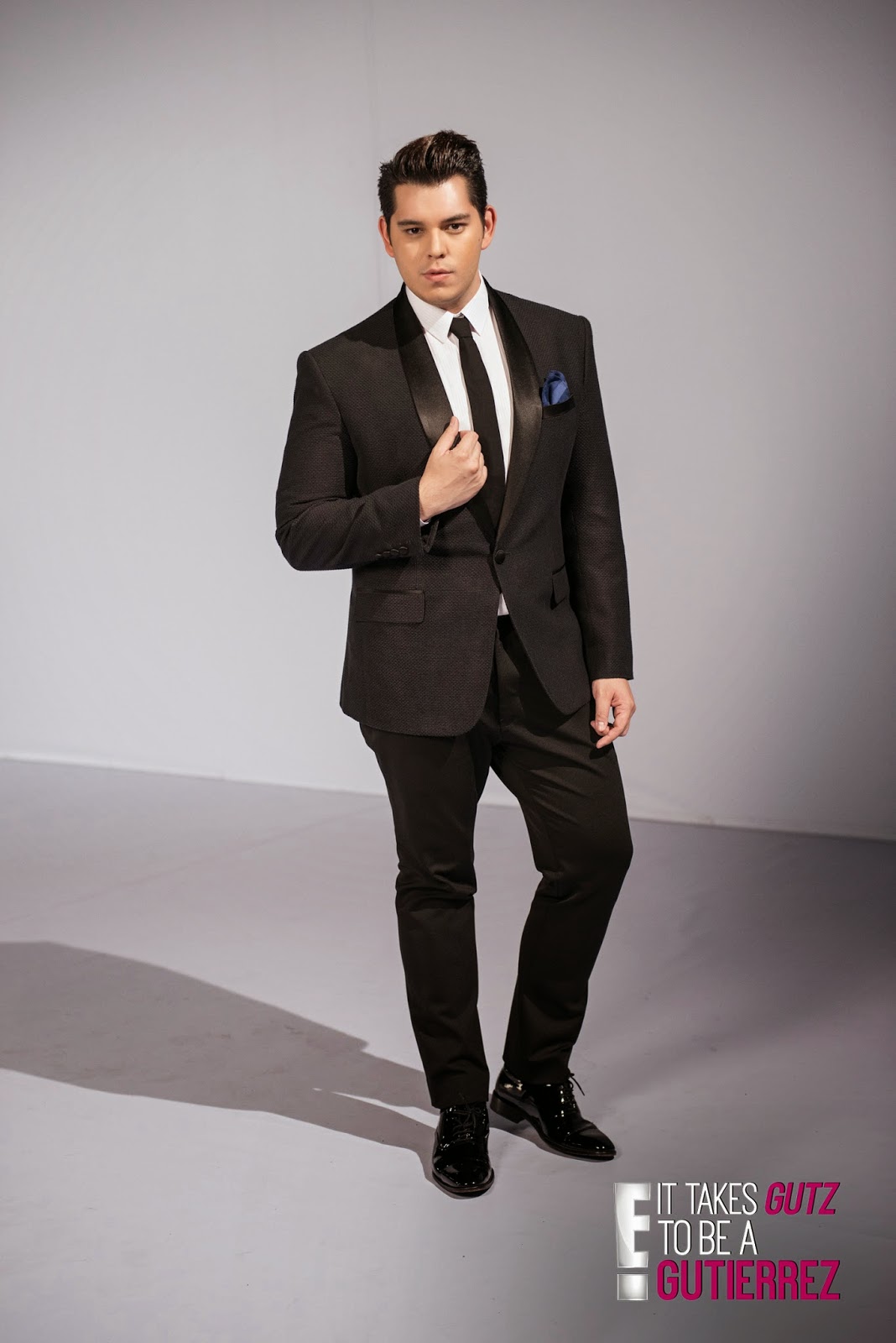 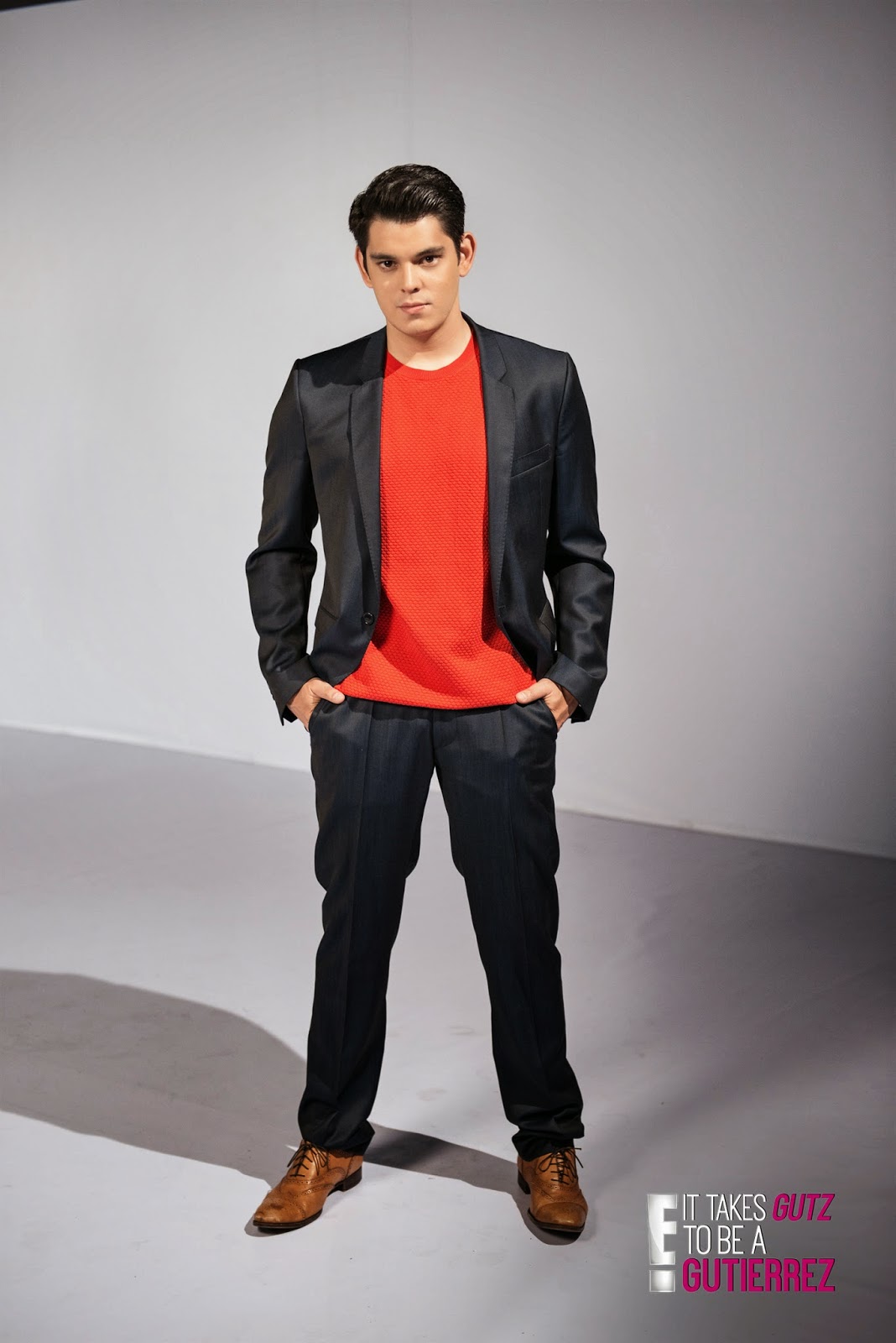 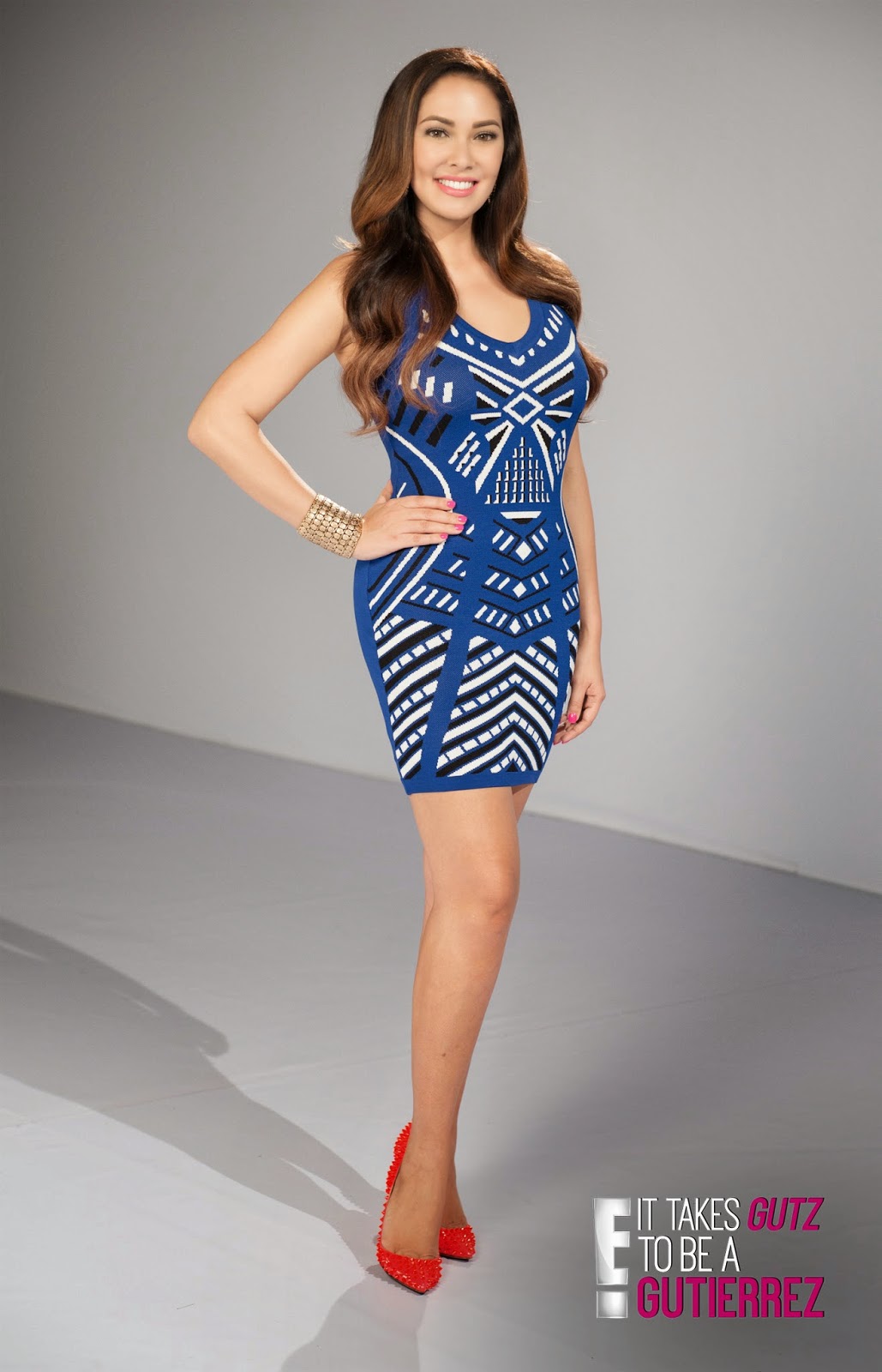 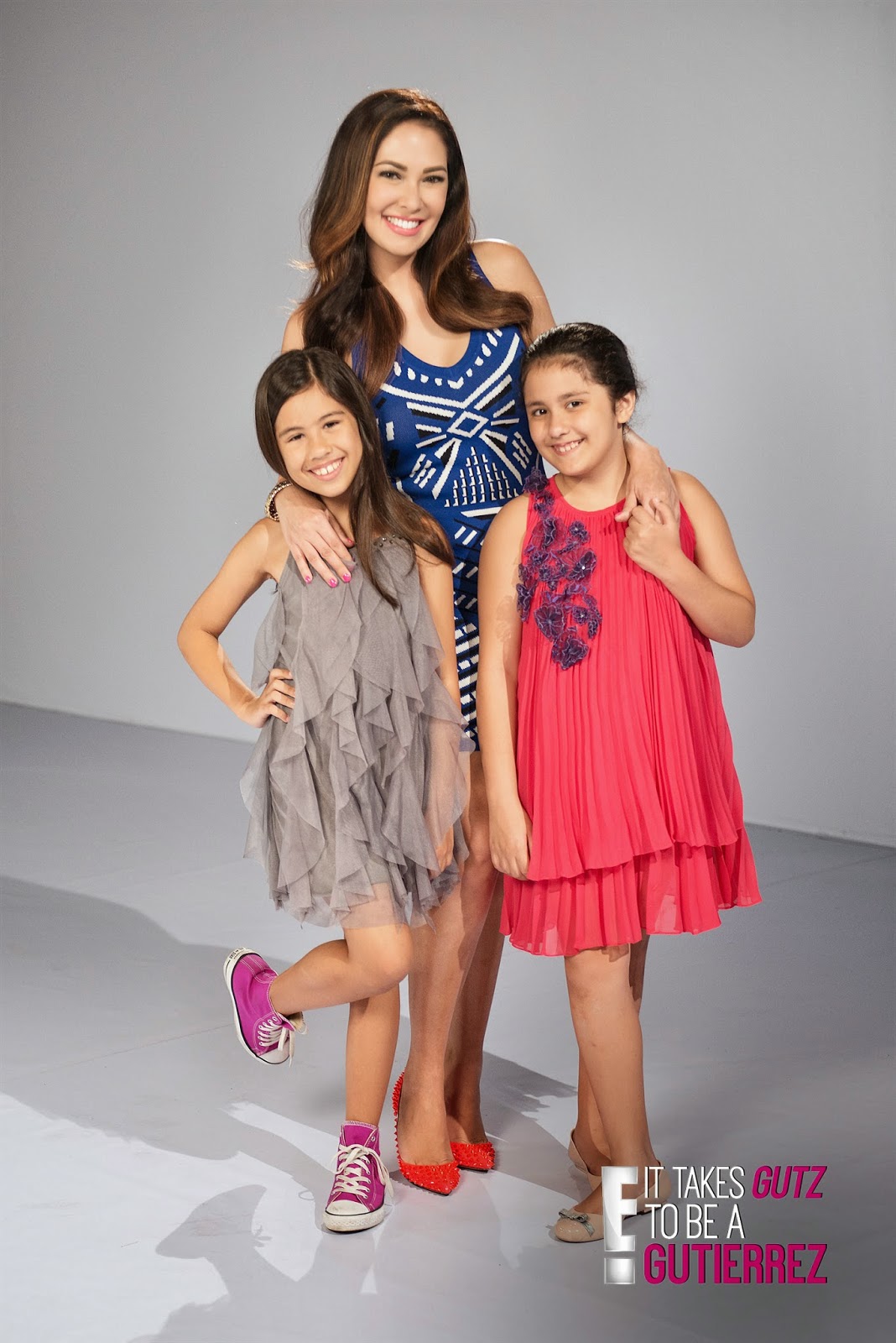 RUFFA GUTIERREZ  (Sharmaine Ruffa Rama Gutierrez)
Beauty Queen, Actress, Model and Brand Ambassador Twitter/Instagram: @iloveruffag
Sharmaine Ruffa Gutierrez, more popularly known as Ruffa Gutierrez, is a premier Filipino actress, model, television personality,beauty queen, commercial endorser and charity fundraiser. With a colorful career that spans over 20 years of being in the local and international entertainment industry, Ruffa’s showbiz experience covers five continents across multiple media platforms such as TV, movies, print and online. Truly a Filipino media and entertainment icon, she has starred in more than 50 film and television productions in a variety of roles.
Born into Filipino showbiz royalty, she is the eldest of six children and the only daughter of long-time sensational celebrity power couple: the timeless Philippine matinee idol and award-winning actor Eddie Gutierrez and popular actress, talent manager and political aspirant Annabelle Rama. Heirs to the Gutierrez dynasty are Ruffa’s brothers: Rocky, Elvis, rapper Ritchie Paul, as well as twins Richard (a.k.a. Chard) – the suave film and TV leading man – and Raymond (a.k.a. Mond) – the sought-after TV host and magazine editor. Sharing the showbiz blood are her two half-brothers, Tonton Gutierrez and Ramon Christopher, both of whom are also successful actors. She was married to Turkish businessman Yilmaz Bektas from 2003 to 2007, and they had their daughters Lorin and Venice.
Ruffa launched into stardom after she signed a four-year exclusive contract with Regal Films – one of the country’s major motion picture companies, starring in sixteen films, notably Underage 2 and Island of
Desire. Her illustrious small screen career started out with a hosting gig on a major musical variety show, GMA Supershow, and as the lead in popular talent show That’s Entertainment. In 1992, at the age of 17, she was chosen to represent the Philippines at the prestigious Elite Model Look of the Year competition in New York. She was crowned Miss Philippines-World in 1993 and bagged the second Princess title in the Miss World International pageant.
Ruffa officially became president of Intel Media International Advertising Company, Inc. in 2005, which represented Fashion TV Turkey during their initial broadcasting period. She became the host of the Philippines’ Next Top Model and landed major endorsements for leading brands in fast-moving consumer groups (Nido, Pantene), fashion (Kisses and Company) and beauty (Metathione, The Calayan Group). New brand endorsements include beauty salon Mikaela, cosmetic clinic Belo Medical Group and real estate group Century Properties. In 2009, she joined international beauty brand Avon as their ambassador for the “Speak Out Against Domestic Violence” campaign, championing the cause to empower women in the fight against domestic abuse.
In the TV arena, additional credits include being lead host for the Philippines’ longest-running and award-winning showbiz talk show, The Buzz, and starring in the Philippine remake of international TV soap opera franchise, I Love Betty La Fea (Ugly Betty). She moved from major TV broadcaster ABS-CBN to the fledgling new TV network TV5, where she was welcomed as one of its top-billed artists. Her first assignment for the channel was a weekly drama anthology, 5-Star Specials, which co-starred some of the Philippines’s top actors. She also headlined her own entertainment news talk show, Paparazzi, and served as a judge in Talentadong Pinoy, a high-rated local talent search show.
In 2013, she starred in Philippine cinema’s highest-grossing blockbuster of all time, Girl, Boy, Bakla, Tomboy. Other recent projects include being the new endorser for skincare brand Cosmo Skin and shooting a film with Philippine cinema’s young showbiz sensations Coco Martin and Sarah Geronimo, produced by VIVA films and Star Cinema. To date, Ruffa remains to be one of the most in demand celebrities in the Philippines and one of its most celebrated faces. Ruffa continues to shine in every field that she finds herself in and continues to grow after every experience that she is faced with in her professional and personal life.

RICHARD GUTIERREZ “CHARD” (Richard Kristian Rama Gutierrez)
Hunky Adrenaline Junkie
Richard Gutierrez was born on January 21, 1984 in Los Angeles, California, USA. He began acting as a child at a tender age of four, and he hasn’t looked back since.
Richard is the son of actor Eddie Gutierrez and talent manager Annabelle Rama. He has a twin brother, Raymond, and four other full siblings: Ruffa, Rocky, Elvis Gutierrez, and Ritchie Paul. He also has two half-brothers from his father’s previous relationships, Tonton Gutierrez, and Ramon Christopher, both of whom are also actors.
Richard is an actor and producer, known for reality series Survivor Philippines (2008), musical variety show SOP Gigsters (2004) and fantasy TV drama Mulawin (2004-2005), which led to a feature-length film of the same name, Mulawin: The Movie (2005).
Richard appeared on the GMA-7 show Click and primetime soap Habang Kapiling Ka, which co-starred his sister Ruffa Gutierrez and half-brother Tonton Gutierrez. The soap was also shown in Malaysia via free-to-air network TV3. Since then he has played lead roles in other GMA-7 series, spanning genres such as fantasy (Sugo, Kamandag), science fiction (Codename: Asero, Captain Barbell), thriller (Zorro, Lupin) and romantic comedy (the Philippine remake of popular Korean drama Full House). In the unscripted arena, Richard hosted the adrenaline-pumping series, Pinoy Adventures, winning him the award for Best Lifestyle/Travel Show Host at the 2012 Philippine Movie Press Club (PMPC) Star Awards for Television. In 2013, Richard headlined GMA Network’s navy-themed conspiracy mystery Love and Lies.
Richard is an adventure-seeker by nature, enjoying the thrill of exploring the outdoors and riding his treasured motorbike. He is currently dating actress Sarah Lahbati.

RAYMOND GUTIERREZ “MOND” (Raymond Kristoffer Rama Gutierrez)
Funny Fashionista Twitter/Instagram: @mondgutierrez
Born and raised in Beverly Hills, California to matinee idol Eddie Gutierrez and talent manager Annabelle Rama, Raymond moved back to the Philippines as a teenager and has worked with his father and other siblings – sister Ruffa Gutierrez and identical twin, Richard Gutierrez – in the Filipino entertainment industry. He also has three brothers, Rocky and Elvis, Ritchie Paul and two step brothers.
Raymond is a TV host, editor, columnist, endorser and actor in the Philippines. Best known for hosting Pinoy Idol in 2008, which earned him the praise of US TV personality, and E!’s Live From The Red Carpet host Ryan Seacrest, Raymond is currently one of the hosts of entertainment newsmagazine Showbiz Police.
In October 2011, Raymond became the style director for Esquire Magazine Philippines, representing the men’s lifestyle publication at the 2012 Men’s Fashion Week in London.
He is also an ambassador for brands in fast-moving consumer goods (Magnum Ice Cream), haircare (TRESemmé) and beauty (Sexy Solution by Belo). In July 2012, he became an endorser for casual apparel retailer, Bench/Fix Salon.
Raymond is a natural comedian who enjoys dining out and appreciating the finer things in life. He co-owns the Gramercy Cafe located at the Gramercy Tower in Makati, Philippines, where he is often asked to guest DJ for the club.

EDDIE GUTIERREZ (Jorge Eduardo Pickett Gutierrez)
The Legend
Eddie Gutierrez is a veteran actor with a career spanning more than 50 years and 100 movies. He was one of the top matinee idols in the ‘60s and ‘70s, being the leading man of the biggest Filipino blockbusters like Susan Roces, Amalia Fuentes and Pilita Corrales. He loves to sing and is often imitating his idol, Elvis Presley.
In 1991, he was nominated Best Supporting Actor by the Film Academy of the Philippines (FAP) for Uubusin ko ang lahi mo (1991). He received the FAP award for Best Actor and the Filipino Academy of Movie Arts & Sciences (FAMAS) for Best Supporting Actor for Ikaw pa lang ang minahal (1992). In recent years, Eddie was nominated Best Supporting Actor for For The First Time (2008) by FAMAS and won the Lifetime Achievement Award at the Star Awards for Movies.
Eddie is married to Annabelle Rama, a former actress who runs a talent management company. She grew up in a political family from Cebu and knows what she wants – from the first time she met Eddie she was star struck, fell in love and pursued him until he committed to her.
Married for more than 35 years, Eddie and Annabelle have been through it all and continue to be partners, best friends and each other’s greatest supporters. Eddie and Annabelle have six children: showbiz darlings Ruffa, Richard and Raymond, as well as Elvis, Rocky and Ritchie Paul. Eddie also has two sons from previous relationships: actors Tonton Gutierrez and Ramon Christopher.
Through the good times and bad, Eddie and Annabelle enjoy a life filled with love, warmth and happiness. They cherish their time together with the whole family and being grandparents to Ruffa’s daughters, Lorin and Venice.

ANNABELLE RAMA (Annabelle Rama-Gutierrez)
The Boss
From where she is right now, one could hardly believe that Annabelle Rama-Gutierrez was born and raised in Cebu City and remains to be humble. Coming from a family that is no stranger to the Philippine political arena, Annabelle considers herself to be 100 % Cebuano.
In the world of academia, Annabelle took up nursing at Southwestern University and then commerce at the San Carlos University. It was during these years that she saw the development of Cebu City North, the district where most of her alma maters were located. Realizing that she wanted more in life, she migrated to Manila to pursue her dream of becoming an actress and fashion/commercial model.
Finding her niche in the business side of entertainment, she is considered to be one of the most successful talent managers in the Philippines. But even with over 20 years of experience under her belt, Annabelle’s ultimate pride and joy is getting and staying married to one of Philippines’ famous showbiz icons, Mr. Eddie Gutierrez, for more than 35 years and counting. A working mother of six, she gauges her success and happiness by her children – Ruffa, Rocky, Elvis, Richard, Raymond and Ritchie Paul.
Now, Annabelle believes that it is time to pay it forward and share her blessings. But after an unsuccessful attempt at politics, perhaps showbiz is truly her business. But can this opinionated, strong-willed woman leave her political passions in the past?