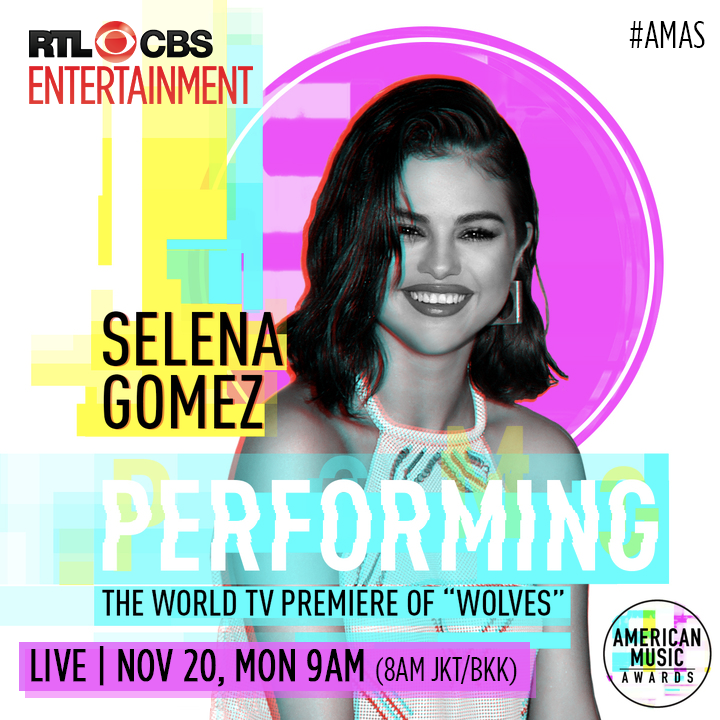 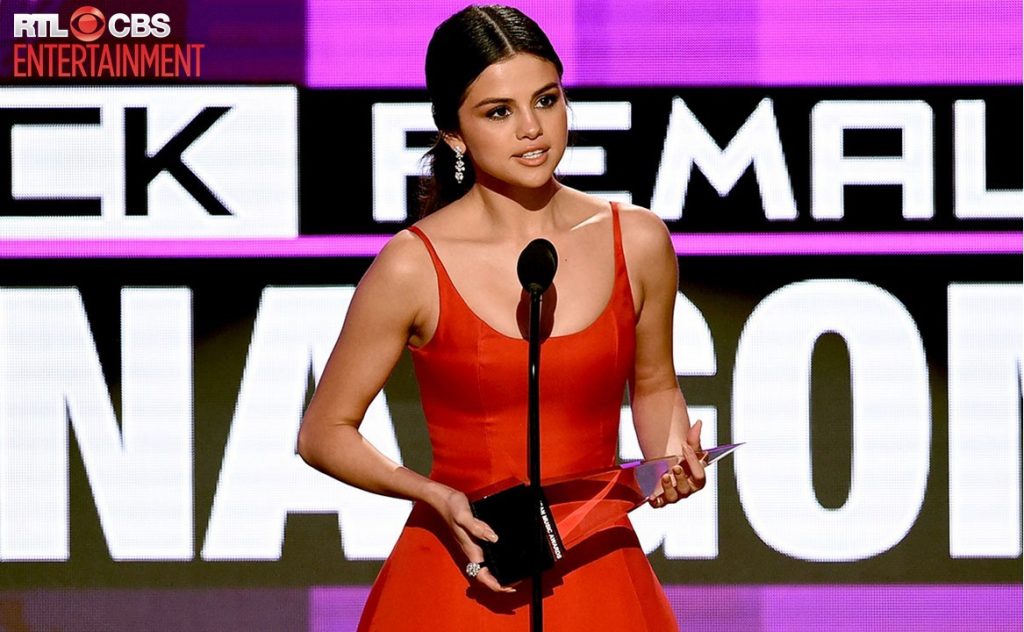 Multi-platinum singer and actress Selena Gomez, will perform her brand-new single at the “2017 American Music Awards.” The influential and inspiring pop superstar, who continues to redefine her role as an artist, is a fan favorite at the American Music Awards having taken home the award for Favorite Female Artist – Pop/Rock in 2016, as well as providing show-stopping performances of her powerful track “Same Old Love” in 2015 and her passionate song “The Heart Wants What It Wants” in 2014. A truly gifted singer, Gomez makes her return to the AMA stage with the world television premiere of her brand new single “Wolves.” The “2017 American Music Awards,” the world’s largest fan-voted awards show where music enthusiasts watch their favorite artists and pop culture icons come together to honor idols, newcomers and record-breakers in the contemporary music scene, will celebrate 45 years of music live from the Microsoft Theater in Los Angeles on Monday, November 20, 2017 at 9:00am (8:00am JKT/BKK) first and exclusive on RTL CBS Entertainment.

Selena Gomez made her mark in entertainment by conquering film, music and television at an early age. On the big screen, she began making the transition from young actress to adulthood with such films as the much talked about Harmony Korine’s “Spring Breakers.” The film premiered at the Venice Film Festival to critical acclaim while Gomez’s performance was singled out as a “breakout.” She appeared in the Academy Award® nominated film “The Big Short” opposite Brad Pitt and Ryan Gosling as well as “Fundamentals of Caring” alongside Paul Rudd. The later film premiered at the 2016 Sundance Film Festival and Gomez was named by Vulture.com as one of “The 20 Best Performances of Sundance 2016.” Other credits include: “Rudderless,” “Neighbors 2” and the James Franco directed “Indubious Battle.” She is currently filming the untitled Woody Allen feature opposite Timothée Chalamet, Elle Fanning and Jude Law. As a recording artist, Selena has sold over 50 million tracks worldwide. She recently released two new singles “Bad Liar” and “Fetish” which garnered enthusiastic reviews. Entertainment Weekly wrote Gomez is making “the most unexpected pop music of the year” while Rolling Stone proclaimed the first single as “smart and streamlined.” In 2015, Gomez released her critically acclaimed album “Revival.” The first three singles off the album “Good For You,” “Same Old Love” and “Hands to Myself” went to number one on the US Top 40 chart. Gomez joins an elite group and becomes only the sixth female artist to have at least three songs from one album reach the #1 position since the chart launched in 1992. Gomez has added executive producer to her impressive list of credits serving as an executive producer of the hit Netflix original series “13 Reasons Why.” Giving back has always been an important element in her life. She was named the youngest goodwill Ambassador for UNICEF at 18 years old and has worked tirelessly to support this organization ever since. Gomez has traveled to Ghana, Chile and Nepal as an advocate for some of the world’s most vulnerable children with UNICEF. Selena was honored for her continued support at Variety’s first ever Unite4: Humanity event with the Young Humanitarian Award alongside Bill Clinton. She has hosted “We Day” in Vancouver, Chicago and Los Angeles for We The Children, an organization that empowers young people to achieve their fullest potential as agents of change by being active local and global citizens.

It was previously announced that music legend, Diana Ross, will take the stage at the “2017 American Music Awards” for a rare performance, where she will also be honored with the “American Music Award for Lifetime Achievement” in recognition of her remarkable career and her outstanding artistic contributions to the entertainment industry and popular culture.

The Artist of the Year nominees are Bruno Mars, The Chainsmokers, Drake, Kendrick Lamar and Ed Sheeran.

American Music Awards nominees are based on key fan interactions as reflected in Billboard Magazine and on Billboard.com, including album and digital song sales, radio airplay, streaming, social activity and touring. These measurements are tracked by Billboard and its data partners, including Nielsen Music and Next Big Sound. The eligibility period for the “2017 American Music Awards” was September 9, 2016 to September 14, 2017.