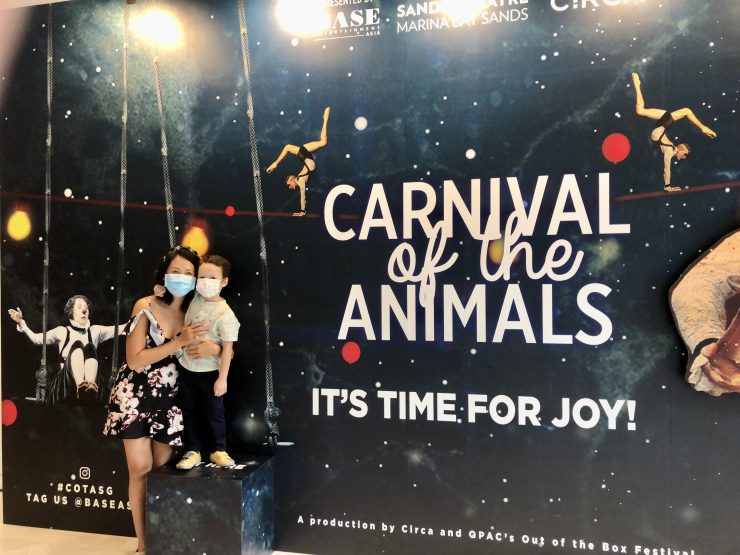 The artist who does not feel completely satisfied by elegant lines, harmonious colours, and by a beautiful succession of chords does not understand the art of music.

Concerned that his latest composition, “The Carnival of Animals” might be deemed too frivolous for a composer like himself with a serious reputation, Camille Saint-Saëns did not allow it to be performed in his lifetime. That was 1886. Except for a few private performances, where guests donned animal masks, his wishes were heeded. Finally performed after the composer’s death in 1921, the frothy frivolous “zoological fantasy” was received enthusiastically by the Paris audiences. Comically irresistible, the composition is, to this day, one of Saint-Saëns’ most memorable and often produced works. Far from denigrating his reputation, “The Carnival of Animals” only enhanced his legacy.

Now, 136 years after its conception, the frothy composition is on stage at one of Singapore’s premier venues, Sands Theatre, Marina Bay Sands. A hybrid of musical, imaginative story, and acrobatic circus, a production by CIRCA and QPAC’s Out of the Box Festival is a marvellous experience designed for children of any age – even their parents or grandparents. In short, anyone who loves sophisticated musical composition, and an engaging story, amid a kinetic, colourful circus atmosphere is enchanted by the wild action on stage. Dinosaur bones shaking, rattling, and rolling to the beat? Street-wise elephants with a rap sensibility? Juggling zebras? Acrobatic kangaroos? Ticking all the fun-loving boxes, the production adds many, many surprises (with some magic) along the way. Let young imaginations go wild for the fifty-minute show!

Accompanied by large-screen animations, the production by the Brisbane-based circus company, CIRCA, romps, rocks, and rolls. The “animals” dressed in black and white recreate the movements of animals on the land, at sea, and in the air. Kids squeal in delight at the comical antics of the singing and dancing menagerie. There is never a dull moment. Just look around the rapt faces of the young (and not-so-young) theatre-goers. Fortunate to have VIP seats, our group included a five-year-old and one ‘kid’ a bit on the other side of seventy. All of us were immersed in the frolicky fun – fifty minutes never passed so quickly. “How do they do that” queried the five-year-old watching the remarkable magic acrobatics.

At a special matinée performance before the very first day of production, spirits in the audience were running high. The stage was set with only a pile of old suitcases in the centre. Those suitcases were to make appearances throughout the play notably at the very end. With a crash of orchestration, the action began. Out leapt 6-7 (it wasn’t always each to count the swiftly moving cast) acrobatic dancers ready to take part in the Carnival. An integral part of the action was the giant backdrop at the back of the stage. Variously, it would highlight animals, graffiti, super large text, and a myriad of patterns. In itself, the backdrop was a work of art.

Surely Saint-Saëns would have dropped his initial fears of the music being too frothy if he had been able to see the way CIRCA embraced the delight and fantastic fun of this production. There were so many highlights.

Producing the most squeals of delight was the scene where the chickens laid giant eggs as a coda to one of the musical sections. Then there were the bright red balloons that floated into the audience inviting anyone to bat them around a bit. Regular-sized balloon, to begin with, only to be replaced by giant orbs which the kids and some adults (like your faithful writer) were happy to punch back into the air. Of course, the music gave the action (on and off stage) a sophisticated resonance.

I haven’t mentioned the sharks. You must see the sharks…