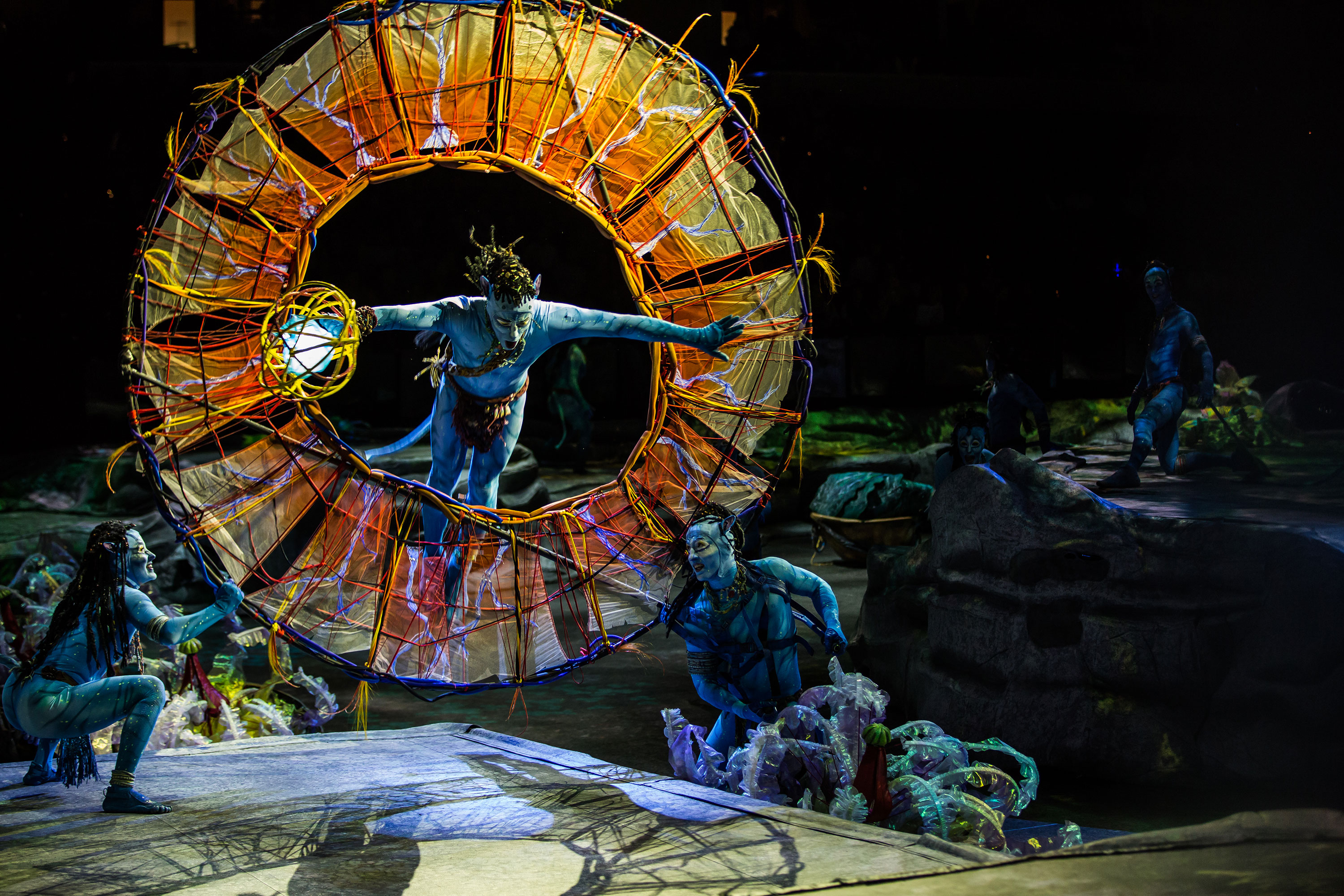 Our approach was very simple. It was about creating a universal language. A show that will be attractive toward every people coming from all over the world. And that was a big thing.

Go there! You, over there! And there! Go!

-Na’vi spoken by performers during the show

Torrents of water sweeping all in their paths. Birds as big as airplanes. Horse-like beasts with six legs. A tortoise the size of a Morris Mini. Parasailing kites roaming the space above the stage. Tri-blade boomerangs launched and caught by a clansman. Avatar acrobatics. Ostrich, flamingo, dinosaur-like Austrapedes clacking their prehensile beaks.

Cirque du Soleil creates a spectacularly different world on the Indoor Stadium stage. As soon as I found my seat at the Indoor Stadium, I knew I was in for an evening far away from my experience. To this world, I brought Janiqueel’s favorite child, Mr. C. Fourteen months old, he squirmed a bit and was just a tiny bit put off by the first drum bangs, flashing lights, and thundering music. Once comforted, though, he sat transfixed for the duration. So did I and the entire audience. Welcome to the Avatar-inspired world of Pandora where, believe me, we had never been.

“Toruk – The First Flight is a mythical tale set thousands of years before the events depicted in the Film Avatar, and before any humans ever set foot on Pandora.” (from the Media Kit) A coming-of-age story replete with other-worldly complications, Toruk follows two Omatikaya adolescent boys in their quest to save the Tree of Souls and, thus, save their species. Their quest-story is narrated by “The Storyteller,” a mysterious, ageless wanderer. “He is a guide and a connector – a messenger of peace and unity.”

Enhancing the story and the on-stage action, there’s an app. Found at “Toruk,” it provides perspective on the story as well as a chance to get into the action with lights that can be flashed throughout the audience at prescribed times. Waving cigarette lighters meets Century XXI. It’s fun, and further immerses us in the action.

High technology does not stop with the app. True to the spirit of Cirque du Soleil, projections from multitudinous sources (40 projectors)  throughout the stadium create mountains, earthquakes, and thundering torrents of water. All of the effects are amazing, but the one that sticks in my mind was the “water” pouring down the mountain slope and spilling onto the stage floor. After a life of movie-going, I’m sometimes a bit jaded when it comes to special effects. But these? They grabbed my disbelief and forced it to surrender. “Realistic” hardly describes the effects on one’s conscious perception. “Real” comes closer.

Complementing these effects, the set at first glance looks like a lumpy moonscape. Pandora is a fictional moon, after all. Soon into the drama, however, the five main elements of the set – Hometree, the Island, the Green Belt, the Dream Catcher, and the two Lateral Screens, appear and disappear seemingly drawn from nothing and passing into nothing again. Magic!

Occupying this world of Pandora are a pantheon of humans and beasts. The humans are largely costumed in body stockings to look like bare skin. Makeup artists have created for them larger eyes and wider noses – human-like, but not quite human. Again and again, one marvels at the creative force behind the whole production. All details are meant to convey the story and heighten the action. And they do!

Accompanying the action on stage is haunting, otherworldly music composed by Musical directors, Bob & Bill. As well as an overall show sound, they gave each of the five elements a unique aural signature created with voices and instruments.

Mr. C, however, was more entranced by the puppets than the stage effects. Giant birds, a mammoth turtle, Calder-like mobile Woodsprites all roam the stage. The pièce de rèsistance, however, (as we might have guessed) is the pterodactyl-like Toruk, a marionette with a 40-foot wingspan. Unlike typical puppets, controlled from above, Toruk is hung from a cable and controlled by six puppeteers on the ground. Oh, so menacing! So huge! So awesome! Mr. C followed every flap, dip, and dive.

Kites, some as large as paragliders, some as small as birds, swoop and reel in the space above the stage at various times. Actors don’t walk or run, they cavort, flip, and cartwheel like gravity-defying sprites. Acrobats spin and climb ropes, ladders, and bridges – a Cirque du Soleil signature. Another circus-like act that infatuated me was one Kekunan tossing three-bladed boomerangs – ultimately four at a time – and (remarkably) catching them. One could quibble, I suppose, at this was not integral to the story’s plot, but it reminded me that, after all was said and done, I was watching a circus.

That thought addressed my qualms about the hard-to-follow plot sometimes complicated by the use (overuse?) of the Pandorian language, Na’vi, invented for the movie, Avatar. But a circus is, and always has been, about spectacle, action, wonder, and delight. The experience of Toruk – The First Flight epitomizes all of that and, in this age of technology, so much more. For Mr. C and myself, it was an evening exceedingly well spent.

Happening May 24 to June 3 at Singapore Indoor Stadium. #CirqueduSoleil