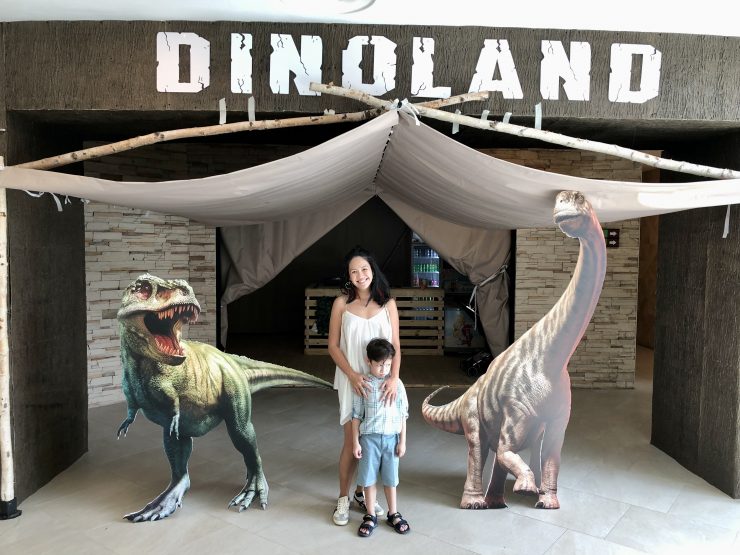 Dinosaurs are the best way to teach kids, and adults, the immensity of geologic time.

Mom told me that we were going to see (and touch!) some animals that were bigger than any I had ever seen in my five years on earth. We had an amazing day among some super-large (and I mean SUPER-LARGE) friends at DinoLand in Singapore.  She said that I could tell Janiqueel’s readers all about it, and I will – with some spelling and vocabulary help from Mom. I mean ‘tyrannosaurus’, ‘pterodactyl’, ‘Mesozoic’ and more. Those are not words I had heard before, but now I recognise them because of the tour we took. Mom said I learned a lot. Maybe so, but I know we had a super-large good time. I’d like to have one of these big critters for a pet. Mom explained that I was 66-245 million years too late. Oh, Well.

To lead us around this weirdly wonderful adventure our guide – a young chap – started out at the Brontosaurus and ended at the fossil digging exhibit where we could see how modern scientists come to know so much about these big old creatures. Then, we were off to see the first of several dinos that live in Dino Land. Here’s a list of all that we met in the order of our trek:

In between the dinosaurs were activities like the Underground Cave, the Swamp Crossing, the Mining Cart, and the Rock Cliff.

So pack a lunch, a bottle of water, and a friend (I took Janiqueel, my mom). And try out the Mesozoic Era for an afternoon an evening. We had a prehistoric good time. And it gave me an idea. Maybe someday I could go to a big school and learn how to be a dinosaur researcher scientist. Just an idea …