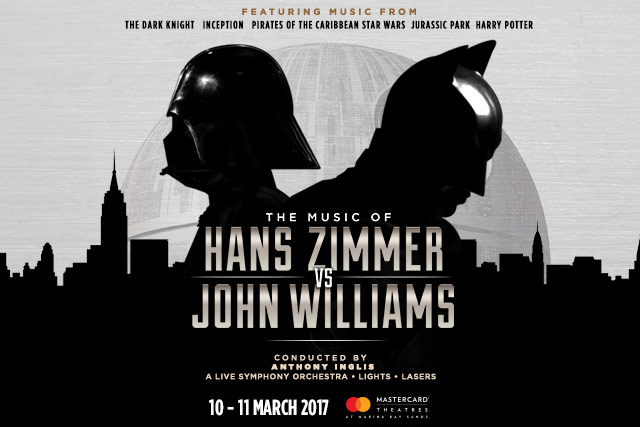 If Anthony Inglis were to have a backup job, he should have been a comedian instead.

It was 2 hours of bliss with spectacular pieces composed by Hans Zimmer and John Williams that we enjoyed over the night conducted by Anthony Inglis. Starting off with ET Adventures on Earth, it was surreal being brought back into a movie I had almost forgotten about but the music brought back all the emotions that I had felt when I watched that movie. Followed by one of my favourites, Dan Brown’s Chevaliers de Sangreal which was very beautifully played and conducted with zest. It was a joy seeing some of our home grown talent on stage making up the full orchestra and being conducted by Anthony Inglis.

Personally, there were a few violinists that caught my eye who seemed much more experienced and graceful than the others with their posture and playing style and confidence. Extra kudos to these!

During Jurassic Park , there was a small hiccup by one of the trumpeters but they managed to fall back into song gracefully. Well done!

After the completion of the piece, a couple of ladies wandered in to the theatre almost 30 mins late and Anthony picked on them like a stand up comedian would, saying, “damn you are very very late. Should I go through the whole re-run of the first 20mins for you?”

Oh yes, and he had made his entrance on a bicycle and his little quirks played out well throughout the evening where he would do costume changes to suit the somgs that he was about to play.

Inception’s soundtrack has always been one of my favourites and this was beautifully covered as well by the team. Following pieces were Batman which as expected was spectacular.

Interval was a good 15mins to reflect on the music and the fact that the orchestra is made up fully of Singapore’s own talent.

The more upbeat Pirates of the Carribean got everyone up and energetic again. Well conducted following which we enjoyed Close Encounters, Man of Steel, Star Wars Princess Leia and the iconic Imperial March and finally ending off with 2 encores. Beautifully conducted and captured! The only other way that this could have been a more fulfilling experience would be if Hans Zimmer and John Williams had been there in person!

The laser show that accompanied the performances was artful too. Although it was generally beautiful, but it got repetitive and highly distracting at times. I came for the music and the performance, not a trance show. At times a little too distracting with lasers shining right in my face that at times I would just close my eyes. But then I wanted to watch the performers as well. So that was there and I couldn’t fully enjoy the show. I personally would have much preferred soft and dim lighting with the focus of spotlights and stage lights on the performers. Leave the laser shows outside of the Mastercard Theatres and keep it classy inside with simple lighting so the focus is not taken away from the music, the instruments and our wonderful musicians and conductor. Other than that it was beautiful watching the performers themselves. More support for Singapore talent is required.