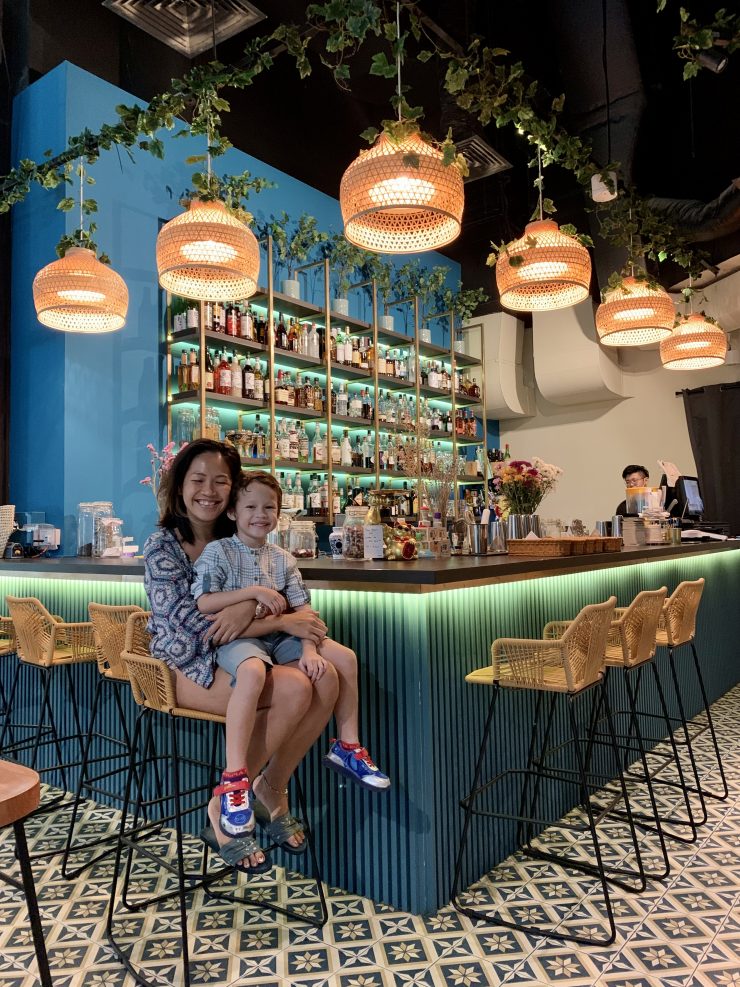 Bedazzled by the bright sunshine at 1 pm, we walked into the cool shade of the Singapore Chinese Cultural Centre at 1 Straits Boulevard, an apt address for a centre celebrating the confluence of cultures along the Malacca Straits. Catering to those who long to chill amid a cool decor influenced by cherki. So what is “cherki”? Cherki is an old game not played much anymore, but still part of the heritage. Emulating the patterns and colours of old-time tilework, the logo-themed interior features representations of the old tiles in a modern aesthetic. The result is cool, subtle, and engaging. In that style, Cherki’s food is traditionally sourced, yet cooked and presented with a modern twist.

Highlighting the several tastes we tried, the XO Seafood Fried Rice was the dish that most delighted our sophisticated culinary crew – Grandma, 5-year-old Mx C, Staff writer, JKJ, and Janiqueel. Who knew that blue food could be so good? Steeped in a flavourful XO sauce, and served with prawns, scallops, and squid, the dish was pleasing to the eye and the taste buds. Once he got past the blueness, even the finicky Mx C was sold on the unique offering.

Taking the idea of blending cuisines to the max, the Satay Chicken Tortilla really underscored the eclectic nature of Cherki’s food. Diverging at full speed from its Mexican background, this tortilla is something else again. For starters, the chunks of chicken are served with coconut milk and peanuts. Decidedly NOT your average Mexican tortilla. Crispy papadams make the hard shell and provide a very pleasing crackle from the first bite to the last. Another example of creativity was inspired by the Cherki Peranakan vibe.

Surprisingly, we had room for dessert, too. Atop the dessert menu was the crowd-pleasing (a small crowd) Chendol Creme Brulee. Azuki beans, and chendol pandan jelly, complemented a traditional crème brulee. In our eager mouths, it melted. Yes, it was reminiscent of the crème brulee everyone loves, but no, it was not like any we had tasted before we tried Cherki. Closing out the dessert odyssey, the homemade rice pancakes with banana were another succulent hit. Gula malacca sauce compliments the banana and rice flavours for yet another unique taste sensation.

Thanks to the friendly, personalized service, charming, shady surroundings, and trendy ambience, Cherki was, to say the least, special. Just a block or so off the CBD, it is well worth diverting your walk a bit to try flavours that you may well have not encountered previously.