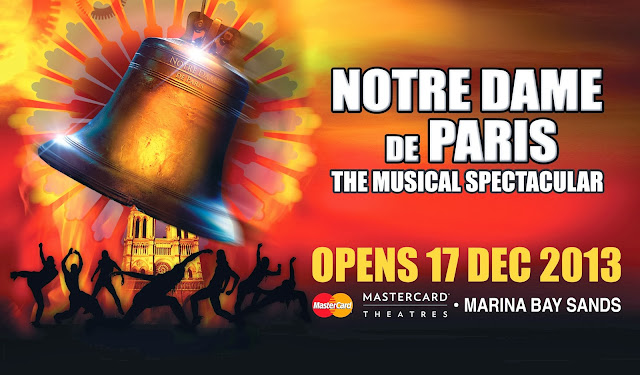 NOTRE DAME de PARIS – Ring Out the Bells!
The musical spectacular based on the story of the Hunch Back of Notre-Dame!

Singapore – 17 December 2013 – The musical spectacular Notre Dame de Paris, which has become a phenomenon around the world cutting across generations, opens tonight at the MasterCard Theatres, Marina Bay Sands, Grand Theatre. Performed for the first time in Singapore in English this majestical show tells the story of Quasimodo the Hunchback of Notre Dame, and Esmeralda the Gypsy girl, in one of the most powerful love stories in history on par with Romeo and Juliet.
Since premiering in Paris, France in September 1998, the musical has attracted audiences of more than 4 million in France alone and broken box office records in Canada, Russia, Italy, Belgium, Switzerland and South Korea surpassing 10 million spectators while combined sales of soundtrack and cast albums have reached the 10 million mark.
Notre Dame de Parishas been staged over 4000 times in 20 other countries, including Italy, Great Britain and the United States, receiving standing ovations every night.
Faithful to Victor Hugo’s classic novel Notre Dame de Paris, the show tells the emotionally charged story of the unfortunate Notre Dame de ParisCathedral Bell Ringer, the hunchback Quasimodo, and his hopeless devotion for the beautiful gypsy Esmeralda. Phoebus, the untruthful soldier and Frollo, the priest torn between his faith to God and his desires will compete for Esmeralda’s love. While Clopin, the leader of the refugees or underclass, and Gringoire the poet will try to save Esmeralda.
The musical spectacular is the creation of lyricist Luc Plamondon and composer Richard Cocciante, whom have both won numerous awards for their work and is directed by Gilles Maheu.  The English lyrics were written by Will Jennings, Oscar-winner for “My heart Will Go On” from the smash-hit film Titanic.
“It’s a well-known story which stands up on its own and doesn’t need to be explained. That’s why there are at least a dozen films based on the Victor Hugo novel, from the silent era to the recent Disney animation,” said Luc Plamandon.
Reminiscent of The Beauty and the Beast and presaging The Phantom of the Opera, Notre Dame de Paris remains a poignant and powerful myth with some of the interwoven storylines being more relevant today than ever: asylum-seekers, racism, the role of religion, the fear of the unknown and man’s place in an ever-changing world.
Riccardo Cocciante beautiful melodies will leave a long lasting impression on local audiences. Featuring more than 54 vivid arias of operatic beauty and rock resonance, the characters are brought to life through stunning vocal performances and visual spectacle – courtesy of the show’s seven principal artistes and 24 dancers and acrobats.
The show will feature acrobatic contemporary dance choreography by Martino Muller, renowned modern dance visionary, contrasting with a beautiful love story moments to create an audience experience reminiscent of French cirque. Dancers appear to be flying across the stage under fantastic arcs, freely incorporating gymnastics, contemporary and even break dance moves into their repertoire – at one moment whirling across the floor in a series of pirouettes, and the next tumbling from a bungee rope high above the stage.
The show will be presented on a grand scale at the MasterCard Theatres at Marina Bay Sands. The modern impressionistic stage set features a 12 metre high ‘climbing wall’ representing the façade of the grand cathedral of Notre Dame as well as the famous Bastille prison in Paris. This amazing edifice is also the platform for a series of stunning acrobatic routines that will leave the audience breathless.
Notre Dame de Paris, the musical spectacular, stands out because of the masterful staging and artistic integrity of director Gilles Maheu, who has revived the 170-year old story with contemporary touches and deft inspirationincorporating choreographies by Martino Muller and costumes designed by Fred Sathal and set by Christian Ratz.
The English language album, featuring the main stars of the London production, also features guest star Celine Dion singing “Live for the One I Love”.
Hit musical, rock-show, opera, concept-album or gothic melodrama, Notre-Dame de Paris retains traditional theatrical elements while using modern staging techniques and choreography to present eternal, universal, mythical tales and themes.
About Notre Dame de Paris
TICKETING AND SHOW INFORMATION
Opens 17 December 2013
·       Excludes the booking Fee of SGD$3 per ticket
FOR TICKET BOOKINGS:
THROUGH INTERNET:
www.MarinaBaySands.com/Ticketingor www.BASEentertainmentasia.com
BY PHONE:   +65 6688 8826
BOOK IN PERSON AT:
Marina Bay Sands Box Offices (Museum, Theatres, SkyPark, Retail Mall and Hotel Tower 1 and 3 Lobby). For more information please log onto – www.MarinaBaySands.com
For exciting ticket package options including accommodation at Marina Bay Sands please visit: www.marinabaysands.com/packages. Corporate and Group Bookings are available via Showbiz.  Email: corporate@showbizasia.com or call 6688 1029
Review coming up! Stay tune! 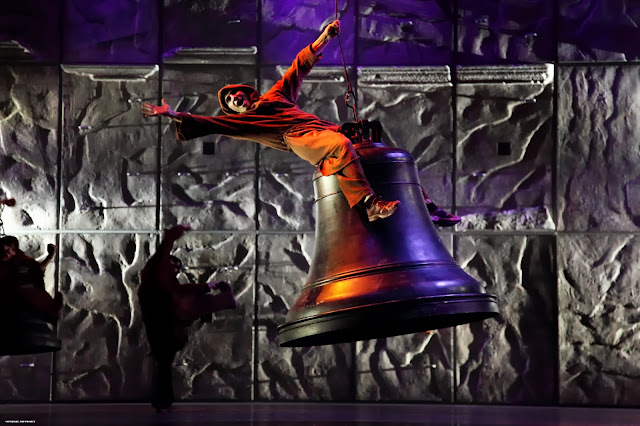 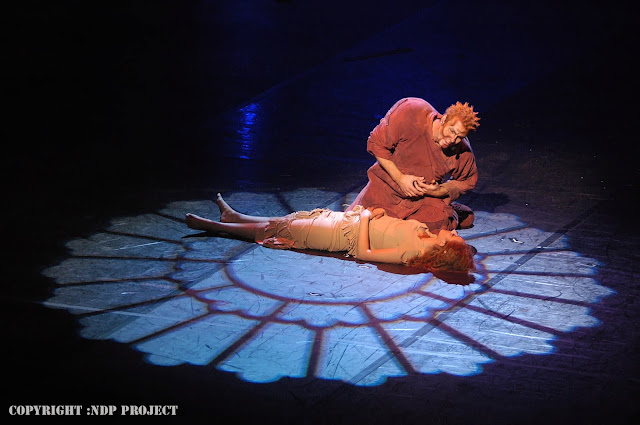 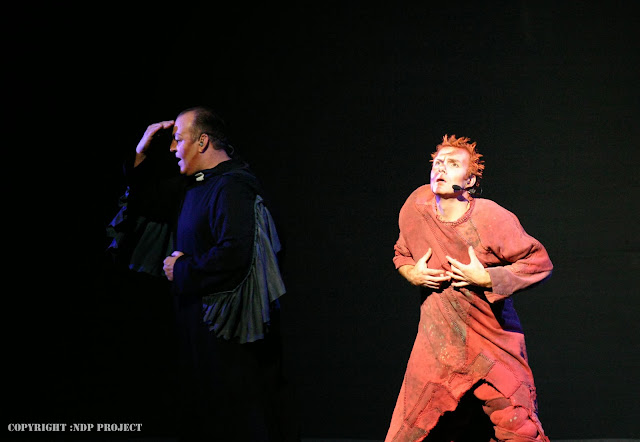 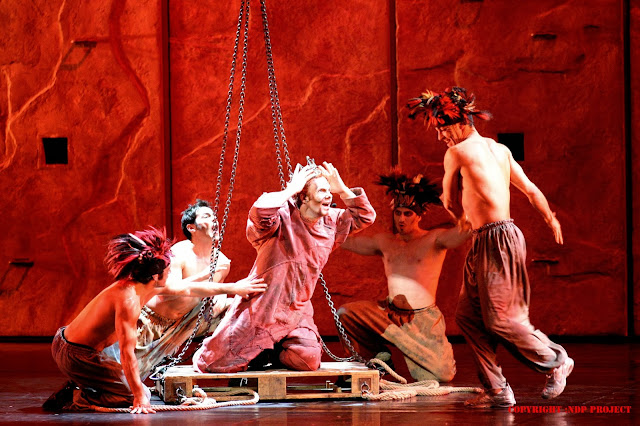 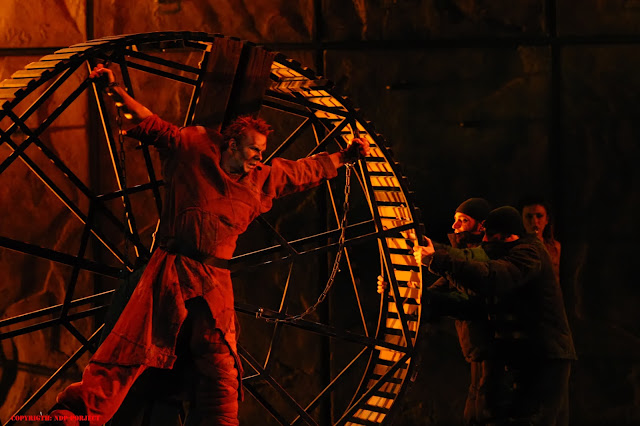 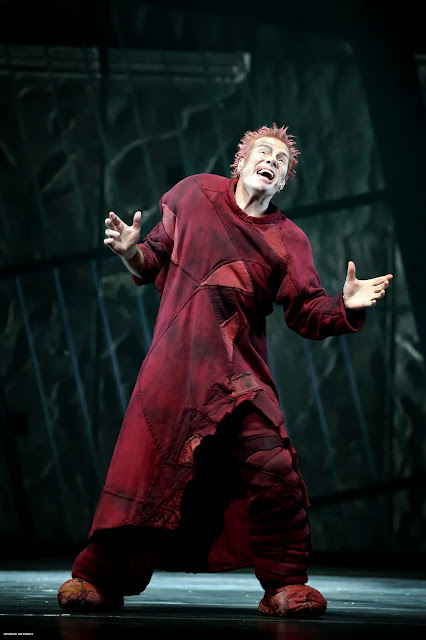 Photos by: Base Entertainment