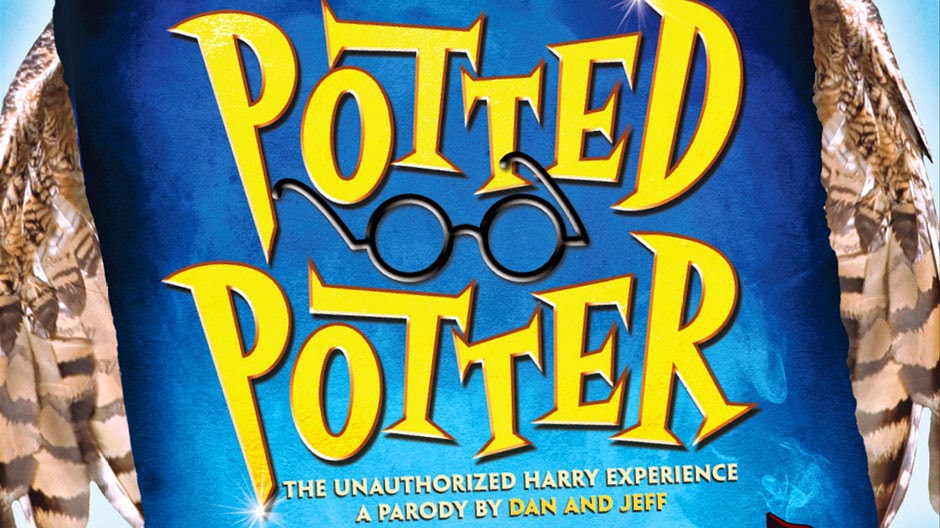 A return season of the 2012 sell-out smash hit
All Seven Harry Potter Books in Seventy Hilarious Minutes!
SINGAPORE, 16th May 2014– After a sell out season in Singapore in 2012 and now back by popular demand this hugely entertaining show, POTTED POTTER, makes a welcome return to the perfect intimate venue – the Jubilee Hall at Raffles Hotel.  POTTED POTTER opens on 9thSeptember and will play only 10 shows.  Tickets are on sale now.
POTTED POTTERtakes on the ultimate challenge of condensing all seven Harry Potter books (and a real life game of Quidditch) into seventy hilarious minutes.  This fantastically funny show features all your favourite characters, a special appearance from a fire-breathing dragon, endless costumes, brilliant songs, ridiculous props and a generous helping of Hogwarts magic!
“Cleverly appeals to both ardent fans and parents.” The Times, UK
Created by double Olivier Award Best Entertainment nominees Daniel Clarkson and Jefferson Turner, the show is a must-see for Potter addicts and a great introduction to the series for anyone who’s ever wondered what all the fuss is about.  Even if you don’t know the difference between a Horcrux and a Hufflepuff, POTTED POTTER will make you roar with laughter.  This brilliant family entertainment is perfect for ages six to Dumbledore (who is very old indeed).
“Fabulously Funny! Will tickle the funny bone of every age group.” The London Daily Telegraph
POTTED POTTERhas played 30 weeks off-Broadway across two sold-out seasons, has had five West End runs, has enjoyed extensive UK and international tours, and has just embarked on a 2014 world tour including Mexico City, Ireland and Canada before reaching Singapore.
“Gloriously irreverent. A very lovable romp through Rowling’s back catalogue.” Time Out, London – Critics Choice
Clarkson and Turner first created POTTED POTTER in 2005 for an appearance at a London bookshop, as a five-minute entertainment for fans awaiting the release of the sixth book in the series.  The show grew from there into a full-length stage production, first seen at the Edinburgh Fringe Festival 2006, and has since played a further four sold-out seasons in Edinburgh as well as sold-out seasons at the Adelaide Fringe, Melbourne Comedy Festival and New Zealand Comedy Festival in 2009
“The single funniest thing I’ve seen in ages.  You’re gonna love this show.” Toronto Star
POTTED POTTERhas earned widespread acclaim and a fan base that crosses generations.  The show has received rave reviews from all the leading UK papers – The Guardian, The Daily Telegraph, The Times, Sunday Express, Daily Mail, London Evening Standard and The Financial Times, as well as being a Time Out Critic’s Choice. In addition, POTTED POTTER has received critical acclaim from leading newspapers and media in New York, Toronto and across Australia.
“Blissfully funny, a winner in every way. This show is a crowd-pleaser.” The Guardian, UK
“Gloriously goofy. Casts the perfect spell over the audience.” The New York Times- Critics’ Picks
“Comic and affectionate – a zany hoot.” New York Post
SEASON DETAILS  VENUE:  Jubilee Hall Raffles Hotel
SEASON:   Tuesday 9thto Sunday 14th September 2014
TICKETS:   from $70
BOOKINGS:   Tickets available through SISTIC.
Internet: www.sistic.com.sg
Hotline: 6348 5555
All SISTIC authorized agents island-wide