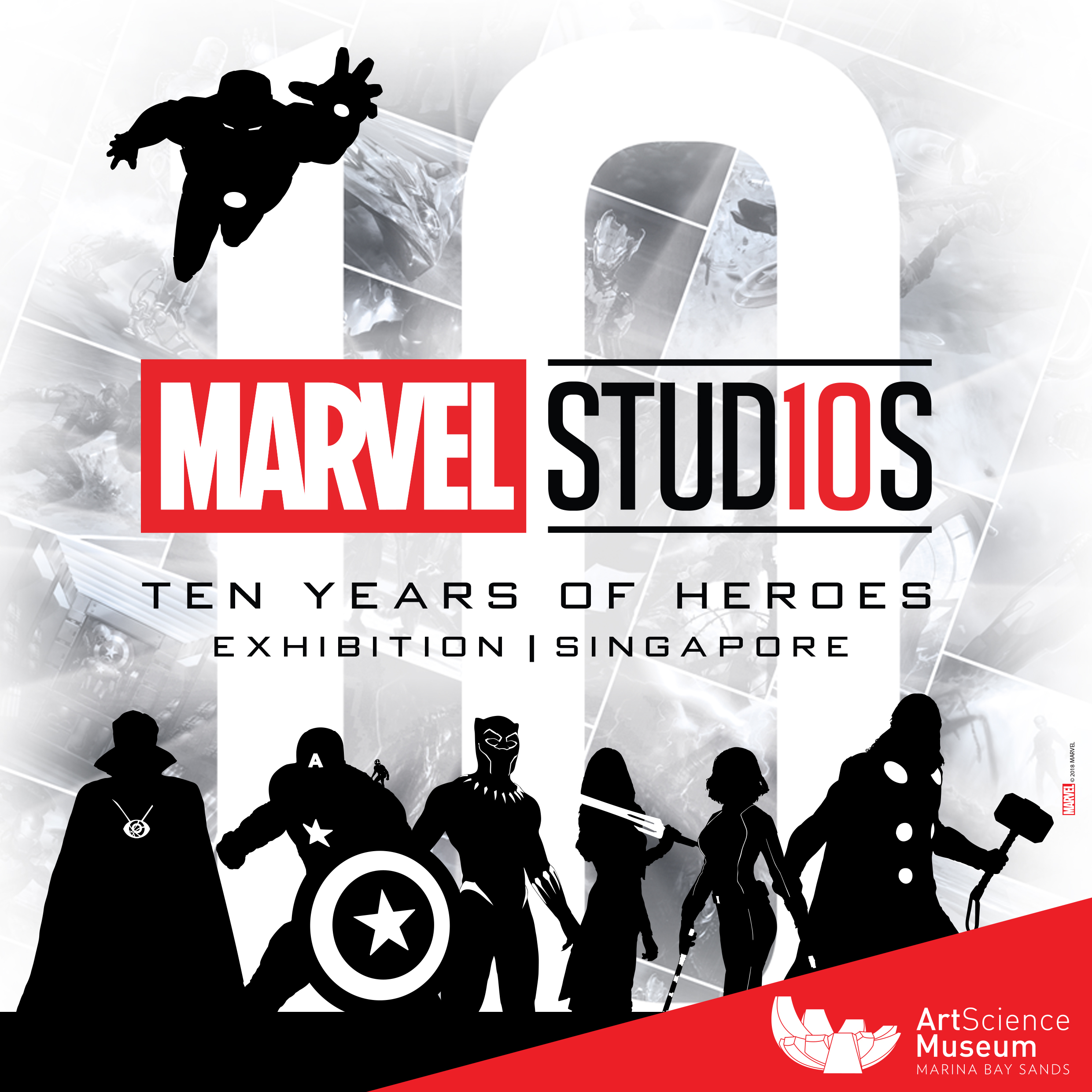 Visitors invited to step inside the Marvel Cinematic Universe

Relive a decade of epic Marvel Studios moments at ArtScience Museum’s upcoming exhibition, Marvel Studios: Ten Years of Heroes. Opening on 9 June, this tenth anniversary exhibition will be an interactive presentation on the unique perspective of each Marvel Studios Super Hero.

In 10 years and across 19 films, Marvel Studios has thrilled audiences and broken new records. Their films have interconnected to unfold a single story that redefined the movie industry. The Marvel Cinematic Universe was introduced with Iron Man in 2008, and continues this year with the release of the highly-anticipated Avengers: Infinity War.

Marvel Studios: Ten Years of Heroes is a cutting-edge exhibition that utilises state-of-the-art AV technology and immersive media to transport visitors into the dynamic world of the Marvel Studios Super Heroes. Visitors will be able to immerse themselves in many of the box office-smashing movies from the Marvel Cinematic Universe under one roof. Highlights include an interactive journey into the world of the recent pop culture landmark, Black Panther; an immersive installation focused on last year’s Thor: Ragnarok, as well as sneak peeks into the upcoming Avengers: Infinity War as well as Ant-Man and the Wasp.

The exhibition also features installations on all the major characters introduced in the first decade of the Marvel Cinematic Universe, including Iron Man, Captain America, Thor, Doctor Strange and Guardians of the Galaxy. It will also include engaging displays curated by ArtScience Museum, which highlight the science, technology, art and cultural stories behind each Marvel Studios’ film.

“Hot on the heels of the visit to Marina Bay Sands by the stars of Avengers: Infinity War, ArtScience Museum is delighted to be working with SPACElogic and Beast Kingdom to premiere a brand new exhibition that delves deeper into the Marvel Cinematic Universe. This visually stunning, interactive exhibition marks Marvel Studios’ tenth anniversary, by inviting visitors to step inside the worlds of Marvel Studios’ key characters. From Iron Man to Wasp, Marvel Studios Super Heroes are diverse, courageous, complex and relatable. Marvel Studios: Ten Years of Heroes brings the realms in which they live vividly to life using innovative technology, bold theatrical sets, and unique artefacts,” said Honor Harger, Executive Director of ArtScience Museum, Marina Bay Sands.

“In the last 10 years, Marvel Studios brought to life many Marvel Studios Super Heroes across 19 movies. MARVEL is now a dynamic global entertainment brand, connecting with fans in unique ways and across multiple platforms,” said Amit Malhotra, Country Head, The Walt Disney Company Singapore. “We are pleased to work with ArtScience Museum to celebrate a decade of the Marvel Cinematic Universe through this specially curated exhibition for fans in Singapore, allowing them to experience our beloved MARVEL stories on another exciting level.”

“We are thrilled to welcome the Marvel Studios: Ten Years of Heroes exhibition to Singapore’s shores following a successful first year of our collaboration with The Walt Disney Company (Southeast Asia) which saw a strong turnout for our specially-conceptualised Star Wars themed events. In addition to enhancing Singapore’s array of family-friendly offerings, we expect the exhibition to further elevate Singapore’s status as a global entertainment destination,” said Ms Carrie Kwik, Executive Director of Arts, Entertainment & Tourism Concept Development, Singapore Tourism Board.

The exhibition is developed by The Walt Disney Company Southeast Asia and Beast Kingdom; organised by SPACElogic and supported by Singapore Tourism Board, ArtScience Museum and Victory Hill Exhibitions. This is part of a three-year collaboration between Singapore Tourism Board and The Walt Disney Company Southeast Asia to bring unique and fun thematic events to Singapore.

Marvel Studios: Ten Years of Heroes exhibition will run from 9 June till 30 September 2018.

Tickets are available at all Marina Bay Sands box offices and website starting 13 April. Visitors can quote the answer to this simple question at the point of purchase, “What colour is the Time Stone in the Marvel Cinematic Universe, as also seen in Avengers: Infinity War?” to enjoy an Early Bird discount of 25 % off all ticket classes. Terms and Conditions apply.