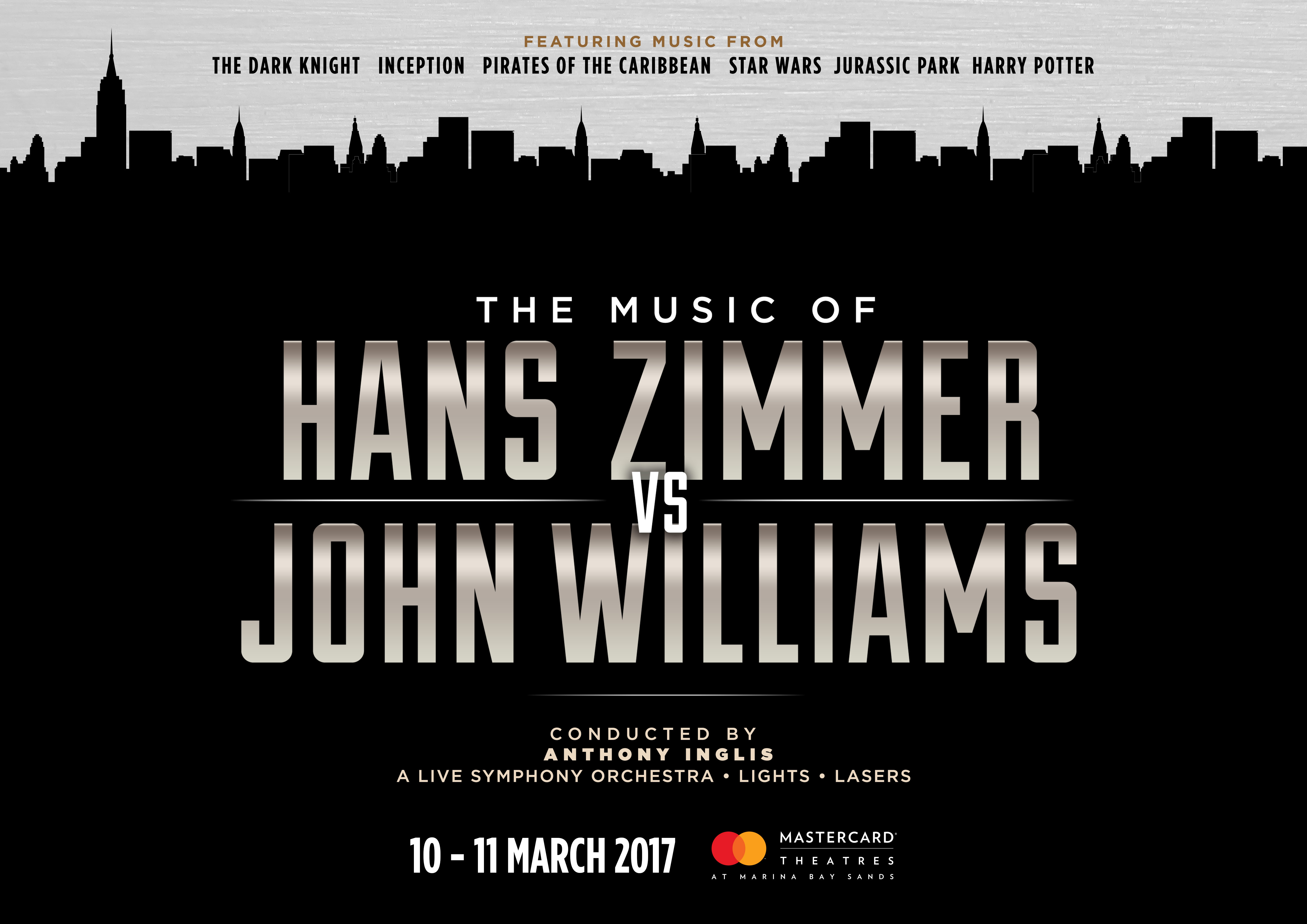 Singapore audiences will be in for a spectacular orchestral experience with a new classical concert direct from the UK and based on the most popular film scores of Hans Zimmer and John Williams, called The Music of Hans Zimmer vs John Williams. Conducted by the irrepressible showman Anthony Inglis, this thrilling concert is a fitting celebration of the very best scores from two of the greatest film composers of the 20th Century in one fabulous programme and accompanied by electrifying multi-coloured light and laser displays. Opening at the MasterCard Theatres at Marina Bay Sands on 10 March for 3 shows only, tickets are now on sale.

This incredible concert will feature nearly two hours of musical scores from movies such as Pirates of the Caribbean, The Dark Knight Rises, The Da Vinci Code, Batman Begins, Man of Steel, Gladiator, Inception, E.T., Harry Potter, Jurassic Park, Close Encounters, Star Wars and Superman just to name a few. Produced in association with Raymond Gubbay Ltd, the same company that brought the popular orchestral concert Star Wars and Beyond:The Iconic Film Scores of John Williams, into Singapore in 2016, each piece will be further brought to life by a magnificent light and laser display stunningly programmed to perfectly complement each musical score. This spectacular lighting display is designed by Durham Marenghi who was appointed as the lighting designer for the Rio 2016 Olympic Opening and Closing Ceremonies.

Nothing can compare to the iconic film scores of two of the greatest composers of the 20th Century as Hans Zimmer and John Williams.

Hans Zimmer is a German composer and record producer. Since the 1980s, he has composed music for over 150 films. His works include The Lion King, for which he won Academy Award for Best Original Score in 1994, the Pirates of the Caribbean series, The Thin Red Line, Gladiator, The Last Samurai, The Dark Knight Trilogy, Inception, and Interstellar. Zimmer spent the early part of his career in the United Kingdom before moving to the United States. He is the head of the film music division at DreamWorks studios and works with other composers through the company that he founded, Remote Control Productions. Zimmer’s works are notable for integrating electronic music sounds with traditional orchestral arrangements. He has received four Grammy Awards, three Classical BRIT Awards, two Golden Globes, and an Academy Award.

John Williams is an American composer, conductor, and pianist with a career spanning over six decades, John Williams has composed some of the most popular and recognizable film scores in cinematic history. From the first sinister bass notes of Jaws to the grandeur of Jurassic Park, from the emotion of E.T. to the mystery of Harry Potter, from the sublime Schindler’s List to the sensational Superman, these magnificent music masterpieces remain as popular today as when first released. Crowning it all is Star Wars, as one of the most epic scores of all time.

About Anthony Inglis
Anthony Inglis, has been described in the UK press as “one of Britain’s most popular conductors” (Manchester Evening News). Upon leaving Marlborough College, he studied music at The Royal College of Music and now leads a busy international conducting career, appearing with some of the greatest orchestras in concert halls and recording studios around the world, including the Royal Albert Hall, where with over 250 conducting performances to his credit, he has been credited as the most frequent visiting artist. Among the orchestras he has conducted are the four main London independent orchestras (LSO, RPO, LPO and Philharmonia), all the British independent and most BBC orchestras, the Melbourne, Sydney, Gothenburg, Singapore symphony orchestras and the Warsaw and Israel Philharmonic Orchestras. He is currently Music Director of The National Symphony Orchestra in London and is Music Supervisor/Consultant for The Phantom of the Opera at Her Majesty’s Theatre, a show he has been with for 27 years. For more information visit: http://www.anthonyinglis.com/

Base Entertainment presents all this memorable music and more in this fabulous concert of Hans Zimmer and John William’s highlights. Don’t miss it.

About Raymond Gubbay Ltd
Raymond Gubbay Ltd is recognised as being at the forefront of promoting and producing popular classical music, opera, ballet and events in the United Kingdom. Established in 1966 the company now regularly presents over five hundred performances each year in London, around the UK and abroad.

The Company is well known for its co-productions at London’s Royal Albert Hall. A successful partnership over two decades has brought arena scale opera to the masses. Productions have included La Boheme, Tosca, Carmen, Aida and a widely acclaimed staging of Madam Butterfly where the floor of the Royal Albert Hall is flooded with water to create a beautiful Japanese water-garden over which the story unfolds. Staged in-the-round these performances have brought new audiences to opera with each season regularly playing to in excess of 50,000 people. By partnering with English National Ballet in conjunction with the Royal Albert Hall, Raymond Gubbay Ltd has also staged spectacular in-the-round productions of the world’s favourite ballets including Romeo and Juliet, Sleeping Beauty and Swan Lake.

ABOUT BASE ENTERTAINMENT ASIA

About MasterCard (NYSE: MA), www.mastercard.com, is a technology company in the global payments industry. We operate the world’s fastest payments processing network, connecting consumers, financial institutions, merchants, governments and businesses in more than 210 countries and territories. MasterCard’s products and solutions make everyday commerce activities – such as shopping, traveling, running a business and managing finances – easier, more secure and more efficient for everyone. Follow us on Twitter @MasterCardAP, join the discussion on the Cashless Pioneers Blog and subscribe for the latest news on the Engagement Bureau.