In celebration of Singapore’s Jubilee Anniversary, one of Singapore’s most iconic waterfront landmarks, The Fullerton Hotel Singapore, has lined up a nine-day tribute to the nation’s 50th birthday with a spectacular projection mapping that will see the hotel’s magnificent façade brought to life through the use of latest 3D animation and projection techniques.

Inspired by the hotel’s illustrious 128-year history as a city landmark and the pivotal role the Fullerton Building played in the history of Singapore, the 8-minute long music and video extravaganza, entitled “A Celebration of Our Heritage”, will offer glimpses of Singapore over the past 50 years, showcasing the various key moments that have taken place at the Fullerton Square, including scenes from the numerous election campaign rallies that took place during Singapore’s development years. In a significant nod to The Fullerton Hotel’s previous role as Singapore’s General Post Office from 1928 to 1996, much of the visual masterpiece will incorporate colourful stamps that were circulated in Singapore during the last 50 years. People watching the video projection will get a chance to see these stamps ‘come to life’ in large 3D images that will move and dance their way across the hotel’s façade, as the latter is transformed into a stunning theatrical backdrop. Many of these facets will pay tribute to Singapore’s shared heritage – celebrating the nation’s multi-ethnic and multi-cultural identity. Additionally, viewers can also expect to be taken on a journey where they can see the transformation of Singapore from a new nation into the garden city and global hub that it is today.

Mr Giovanni Viterale, General Manager of The Fullerton Heritage, which comprises The Fullerton Hotel, The Fullerton Bay Hotel, The Fullerton Waterboat House, One Fullerton, Clifford Pier, The Fullerton Pavilion and Customs House, explained, “We’re delighted that we are able to celebrate SG50 with the nation through this video projection light show. We hope that “A Celebration of Our Heritage” will resonate with spectators on each of the nine nights – for Singaporeans and long-time residents, the show will evoke national pride, and be a nostalgic walk down memory lane; for visitors, it will offer a glimpse of our very rich heritage and a memorable visual treat. In working with our technology partner, we have curated a spectacular production that we hope will be a highlight in this year’s National Day Marina Bay Light-up.” 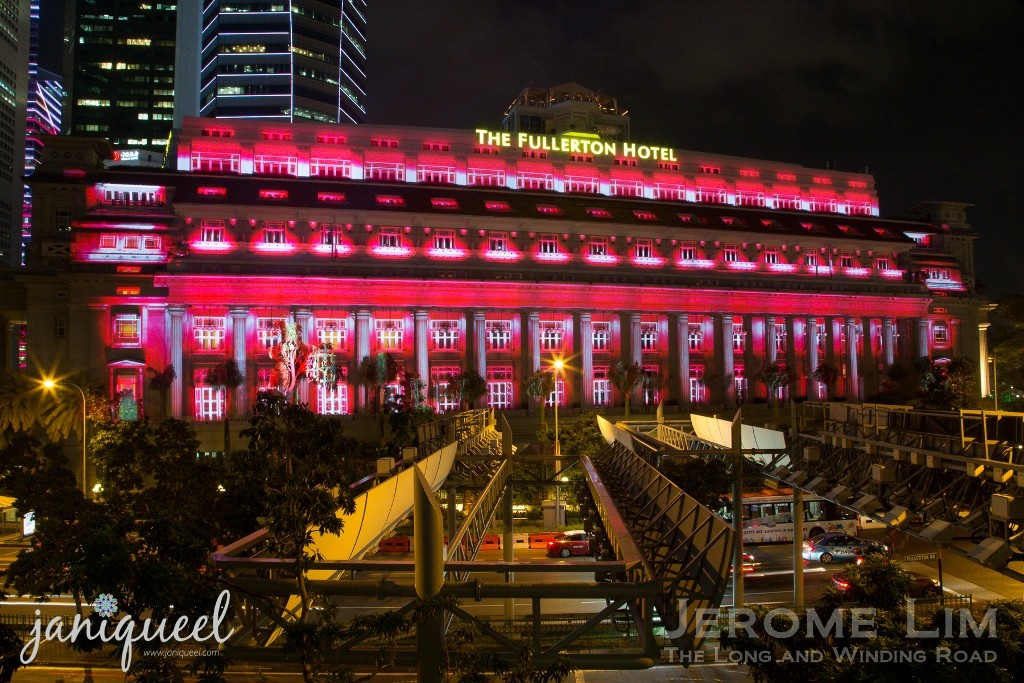 “A Celebration of Our Heritage”, produced in collaboration with Hexogon Solution Pte Ltd, the Singaporean technology partner responsible for the outstanding light show at the recent SEA Games Opening Ceremony in Singapore, which earned the Guinness World Record for the “World’s Largest Digital Projection System”, will also be a fitting backdrop to other entertaining and exciting activities 2 that have been lined up for members of the public along the Marina Bay including the National Day installations around the bay area, as well as an exhibition by the National Heritage Board (NHB) at Clifford Square. 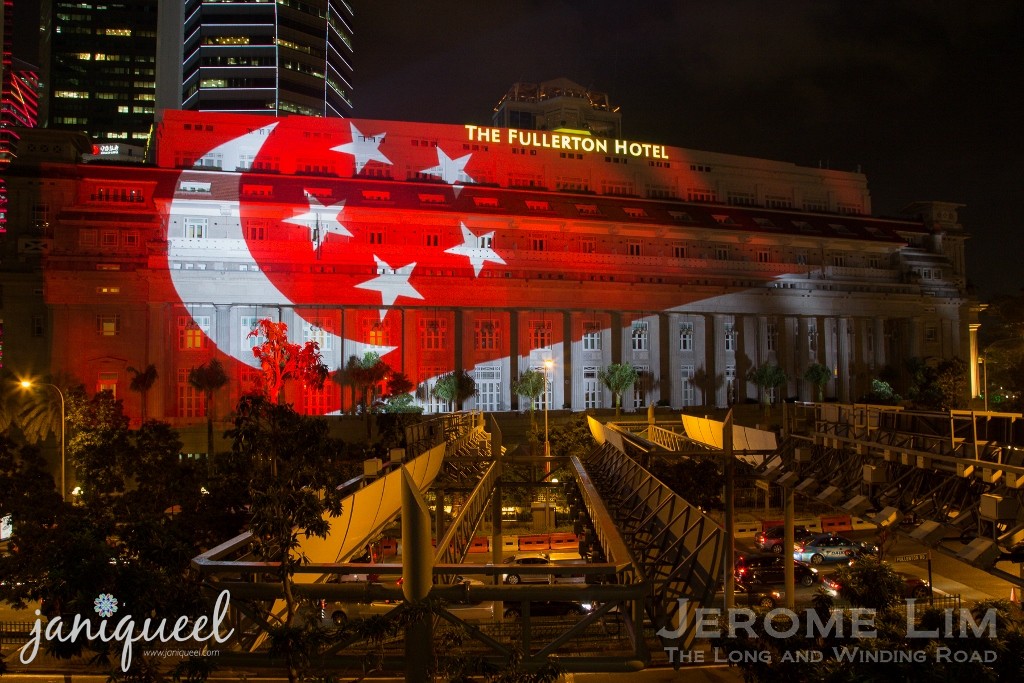 During the Jubilee Weekend, on 7th and 8th August, from 7.30pm, The Fullerton Hotel will also distribute complimentary kachang putih (roasted or sweetened peanuts or beans traditionally sold in paper cones) and potong ice cream (rectangular popsicles in local flavours such as red bean, yam and durian) at One Fullerton to add to the sense of nostalgia.

Additionally, visitors to The Fullerton Heritage precinct during this period can also stand to enjoy a whole slew of festive celebrations taking place around the area during this celebratory period. As part of the National Day Celebrations, spectators in the vicinity of One Fullerton and The Fullerton Bay Hotel can view the parade ‘live’ via LCD screens that will be set up around the bay. There will be fireworks and an aerial display by the Singapore Air Force on 9 August, as part of the National Day Parade (NDP) proceedings at the Padang, as well as a full-dress rehearsal on 1 August.

Popular F&B outlets at One Fullerton will also be offering their very own special promotions to commemorate the occasion. For more details please visit The Fullerton Hotel’s website at http://www.fullertonhotel.com/ or The Fullerton Hotel Facebook Page (www.facebook.com/TheFullertonHotel)

In keeping with the celebratory mood, The Fullerton Hotel will also be rewarding ten lucky winners with a complimentary weekend night’s stay. Members of the public are encouraged to take a photo of the video projection and submit their entries with their birthday wishes to the nation. To stand a chance to win, simply complete the following steps:

1. Take a photo of the video projection

3. Upload the photo, include a caption of your birthday wishes to the nation as well as the hashtag #FullertonSG50LightUp

Get your friends to like your photo to increase your chances of winning. Contest closes on Sunday, 9 August, 11.59pm and all winners will be notified via email.

”A Celebration of Our Heritage” is a definite must-see for both local residents and visitors alike. Show timings are as follows: 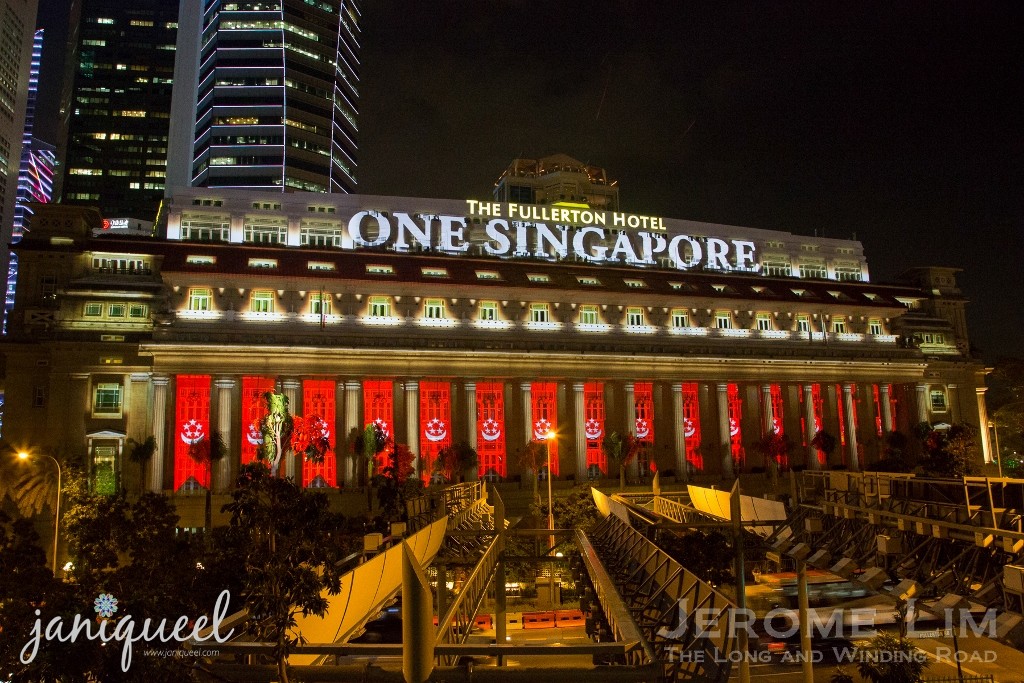 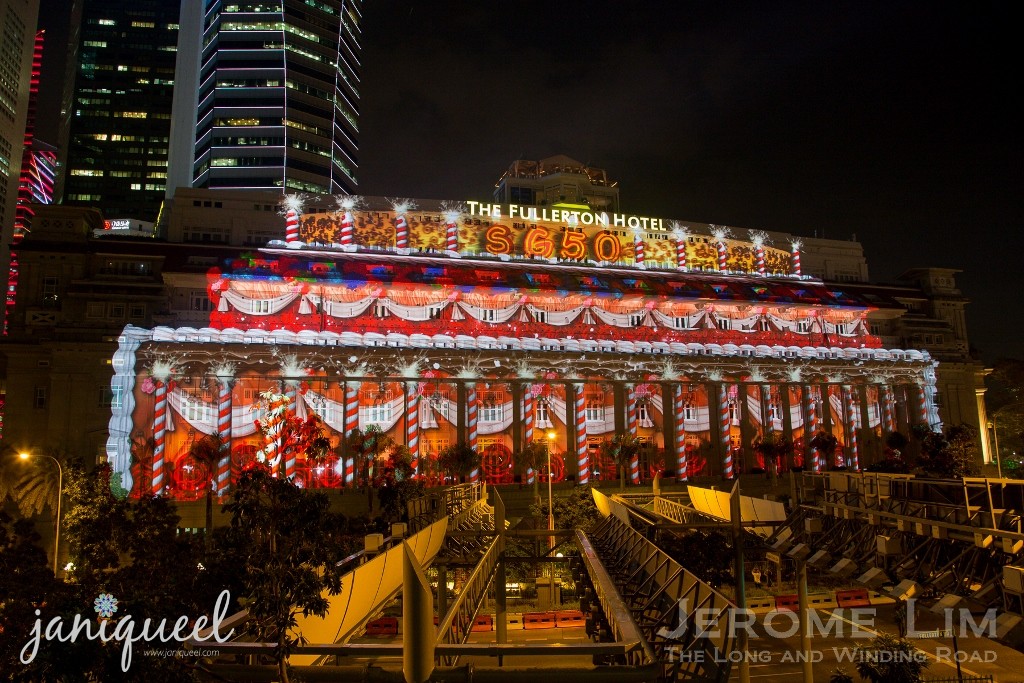 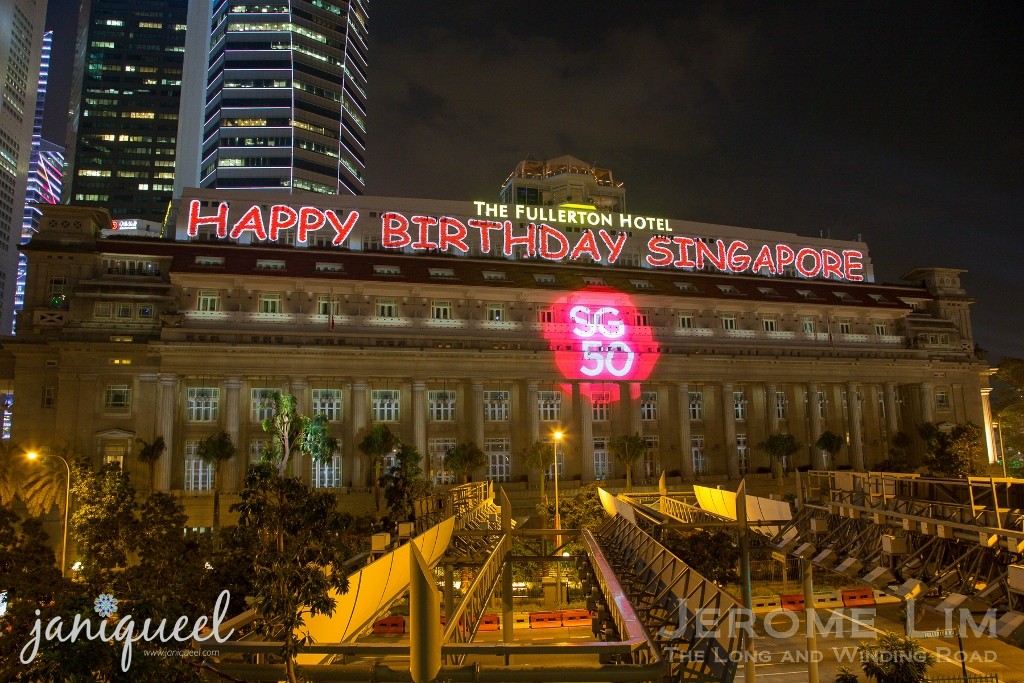