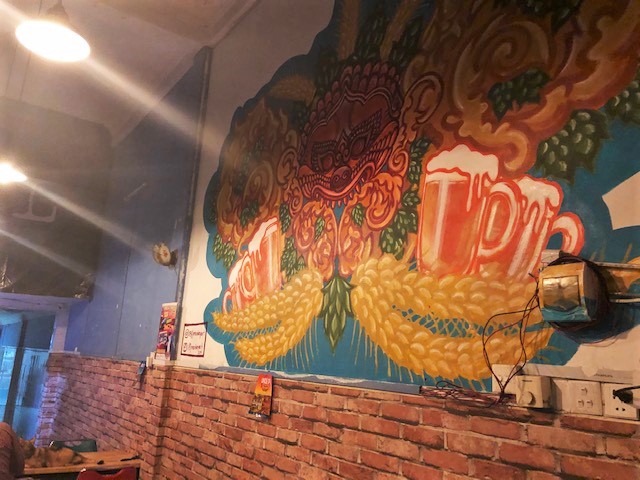 Janiqueel Guest Writer, JKJ, has an evening on the town – hard duty for a quiet writer.

Alcohol is necessary for a man so that he can have a good opinion of himself, undisturbed by the facts.

At 7:20 PM, the Lost Plate tuk-tuk was at my hotel. Poised to exhibit navigational and maneuvering skills our kindly driver was ten minutes ahead of schedule. This was Hidden Plate’s “food tour”, “The Hidden Bars of Phnom Penh”. Though, “Drinks Tour’ would be a more apt appellation for our evening on the backstreets of Phnom Penh. Joined by our trusty guide, Thearo, we sallied forth to explore the tiny streets, shops, and homes of Phnom Penh-ians. The tour was to be a glimpse into the work-a-day world of this new-yet-ancient Southeast Asian Capital.

Without further ado, my two fellow-tourers, Thearo, and our tuk-tuk pilot plied our way amidst vehicles MUCH larger than ours southward towards the storied realm of the Russian Market, at the vortex of Phnom Penh’s tumultuous history and 21st-century modernity. Phnom Penh is changing fast, but the Hidden Bars tour showed that the original Phnom Penh is not far beneath the buzzing, busy surface. The area around the Russian Market is a maze of tiny streets where cars and, not unusually, large lorries jostle for elbow space.

The evening was creeping in as we pulled up to a craft beer establishment in a kind of warehouse-y district a few blocks from the market itself. The bearded youngish founder of the place was a walking encyclopedia of craft beer knowledge, from barley varieties to hops content in the brews. He pointed us toward the chalkboard listing tonight’s choices: Coconut Brown, Citra Pale, and Ginger. We sipped all of them before choosing our favorite and quaffing a glass of the personal best. A fan of stout, I cottoned onto the Coconut Brown, a hearty medium-dark beer with plenty of taste flourished around the edges. And we were just getting started.

Leading up to that moment of decision, the erudite owner took us through the basics of the brew-craft. He lay three varieties of barley on the table and several hops that we crushed and smelled.

With any semblance of knowing our whereabouts in PNH gone and forgotten,  we boarded the buggy and headed for a Coke machine at the end of a dimly-lit alley. “Why?” is a reasonable question. Because the machine – exhorting passersby to “Drink Coca-Cola in bottles” – really a hidden door to a speakeasy; That’s why. On that Thursday evening (fully dark now) there was a sizable crowd who seemed to know about the secret entrance. Once inside we saw another happening place in the shadows. We were officially in the cocktail time zone. Spoiled for choice again, I went with Kansas 48 – Vodka, Thai Basil, Honey, pineapple, Lime, Bitter. It becomes a semi-creamy caramel-colored liquid served in a martini glass. Very elegant here in the shadows.

What beautiful bars! Our next watering hole was lined with wood panels and accented by colorful eclectic artworks. It was decidedly the poshest of our bar crawl. They do craft beer, too, but we were led to the cocktail menu by the owner, Dara, who regaled us with in-depth information about the neighborhood and his, to my eyes at least, thriving business. Choice of cocktail next, then a taster of home-made rice wine, then a creamy aperitif.

Appropriately, the next establishment gave us some space. This was on a bustling street of, I’m guessing, 15 bars each as well-lit and colorful as the next. With comfortable benches and soft cushions, the bar proved a tonic to weary revelers feeling the effect of a bar tour. I mean, what did we expect?? Our last hurrah offered solace from the hurley burley required of dedicated bar hoppers. What, specifically, we sipped, I’m afraid I’ve forgotten. Let’s just say the evening ended well with a rude to the hotel’s doorsteps in our faithful tuk-tuk, with a Bondian name, “007”.

In contrast to my first Lost Plate tour in Phnom Penh, the Hidden Bars tour was less oriented to history and local color than our food tour had been. I would have welcomed a stronger current of content. That small quibble noted we had a ball! It’s a given that this tour will show several bars. The extras are zooming through the neighborhoods and seeing the panoply of circumstances that informed each of the bars. Delightful evening!

This article was researched and written by JKJ.