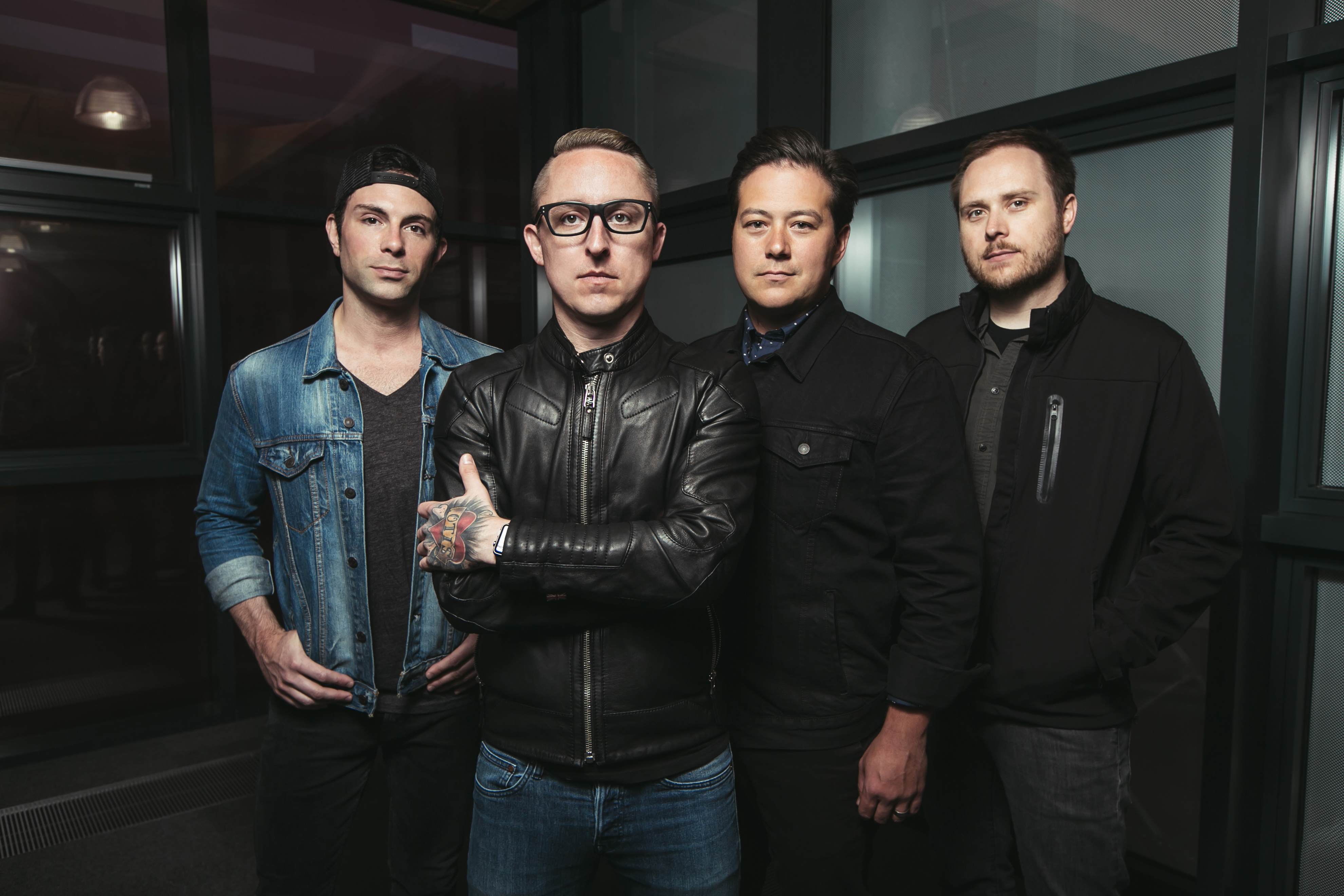 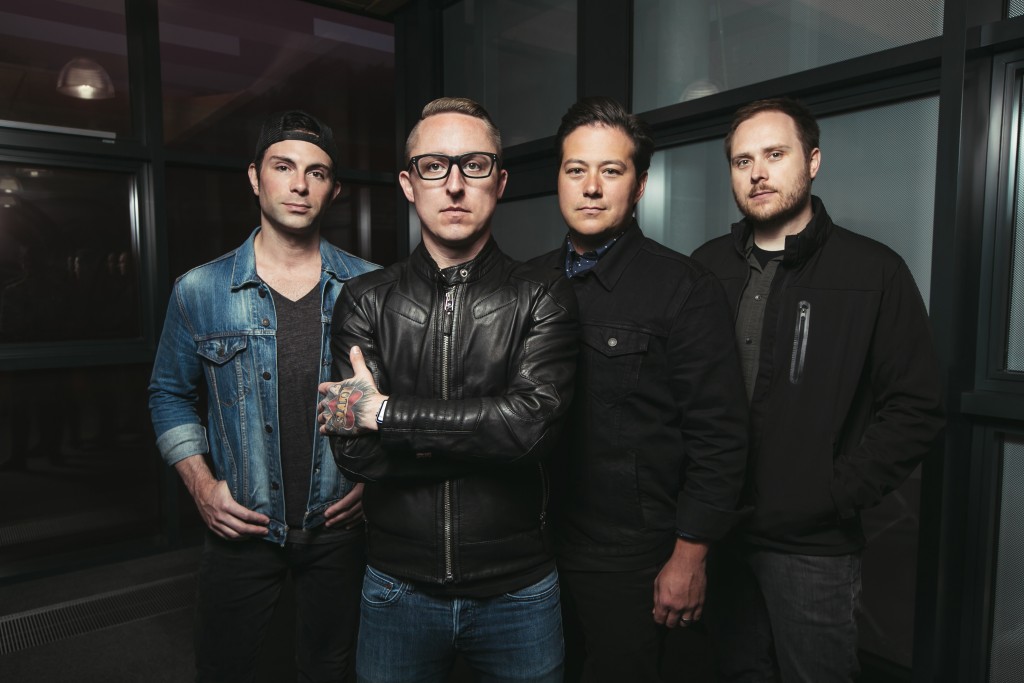 “WHEN SAYING FAREWELL, IT IS HARD TO KNOW WHERE TO START, ESPECIALLY WHEN THERE ARE SO MANY REASONS NOT TO SAY IT, BUT THE TIME HAS COME TO SHARE THIS NEWS. AFTER COUNTLESS DISCUSSIONS AND MONTHS OF THOUGHT, WE HAVE DECIDED THAT IT IS TIME FOR YELLOWCARD TO COME TO AN END. THIS WILL BE OUR LAST ALBUM AND OUR FINAL WORLD TOUR.” – YELLOWCARD

Floridian rockers Yellowcard released their final album, simply titled
Yellowcard, on 30 September 2016 via Hopeless Records. The band will take
their farewells on the road with The Final World Tour landing in Singapore on
12th February 2017.

Since uniting in Jacksonville, Florida in 1997, Yellowcard have delivered some
of this generation’s biggest anthems including ‘Only One’, ‘Ocean Avenue’,
‘Hang You Up’ and ‘Way Away’.

The forthcoming self-titled album was a personal journey for the band; self-produced by Ryan Key and guitarist Ryan Mendez with long-time ally and
close friend Neal Avron on board as Executive Producer. Yellowcard will be a lasting finale for the band’s incredible journey that includes ten acclaimed albums and touring for almost two decades across six continents. Their most recent show in Singapore was in Nov 2014. Come join the celebrations, bidding Yellowcard a fond farewell as they tour across Asia/Australia for the very last time next February. Tickets are expected to sell like hot cakes, don’t miss out!

“WE WILL BE FOREVER GRATEFUL TO YELLOWCARD FANS ALL OVER THE WORLD FOR THE OPPORTUNITIES YOU HAVE GIVEN US. WE HAVE PLAYED SHOWS FOR NEARLY TWO DECADES ON SIX CONTINENTS, AND HAD THE CHANCE TO KEEP RECORDING THE MUSIC WE LOVE YEAR AFTER YEAR. WHILE IT IS WITH SADNESS THAT WE SAY GOODBYE, IT IS WITH GRATITUDE AND AMAZEMENT THAT WE LOOK
BACK ON A CAREER WE CAN BE PROUD OF, AND WERE SO VERY LUCKY TO HAVE HAD.” 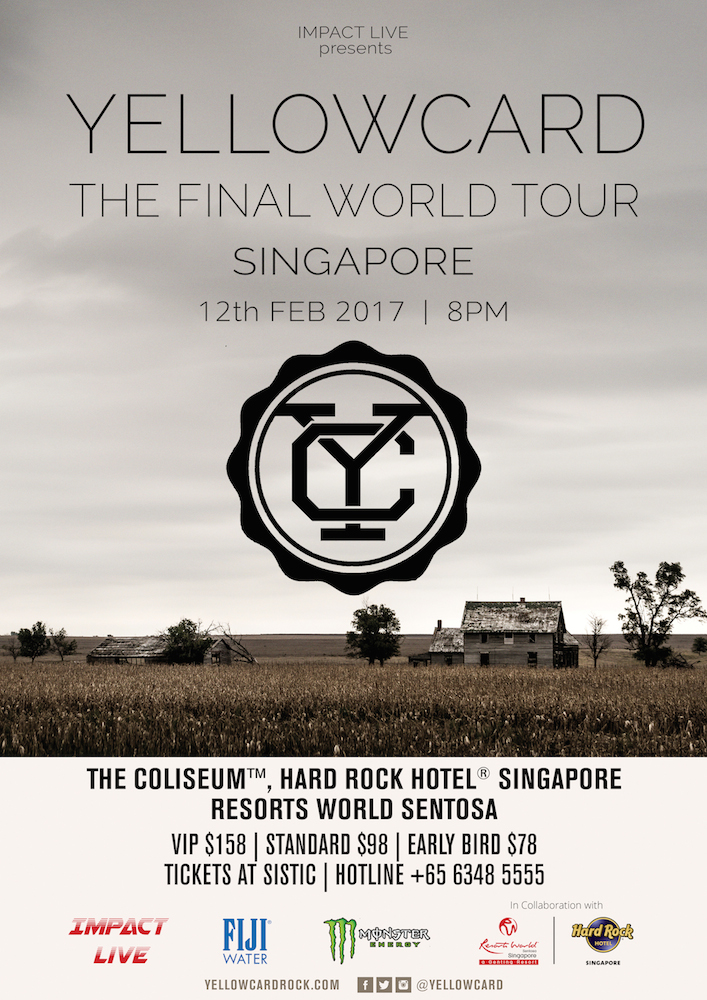 ABOUT YELLOWCARD
Yellowcard is an American rock band formed in Jacksonville, Florida, in
1997 and based in Los Angeles since 2000. The band is well known for
its singles “Ocean Avenue”, “Only One”, and “Lights and Sounds”. The
group’s music is distinctive within the band’s genre because it features
the prominent use of a violin. The band has released ten studio albums,
with its most recent and final one, Yellowcard, released on September
30, 2016. On June 25, 2016, the band announced on via its website
that the group would be breaking up after a final tour, stating: “Please
come and join us on our last trip around the globe. We hope to share
this final record and tour with each and every one of you
http://www.yellowcardrock.com
http://www.facebook.com/yellowcard
http://www.youtube.com/user/YellowcardVEVO