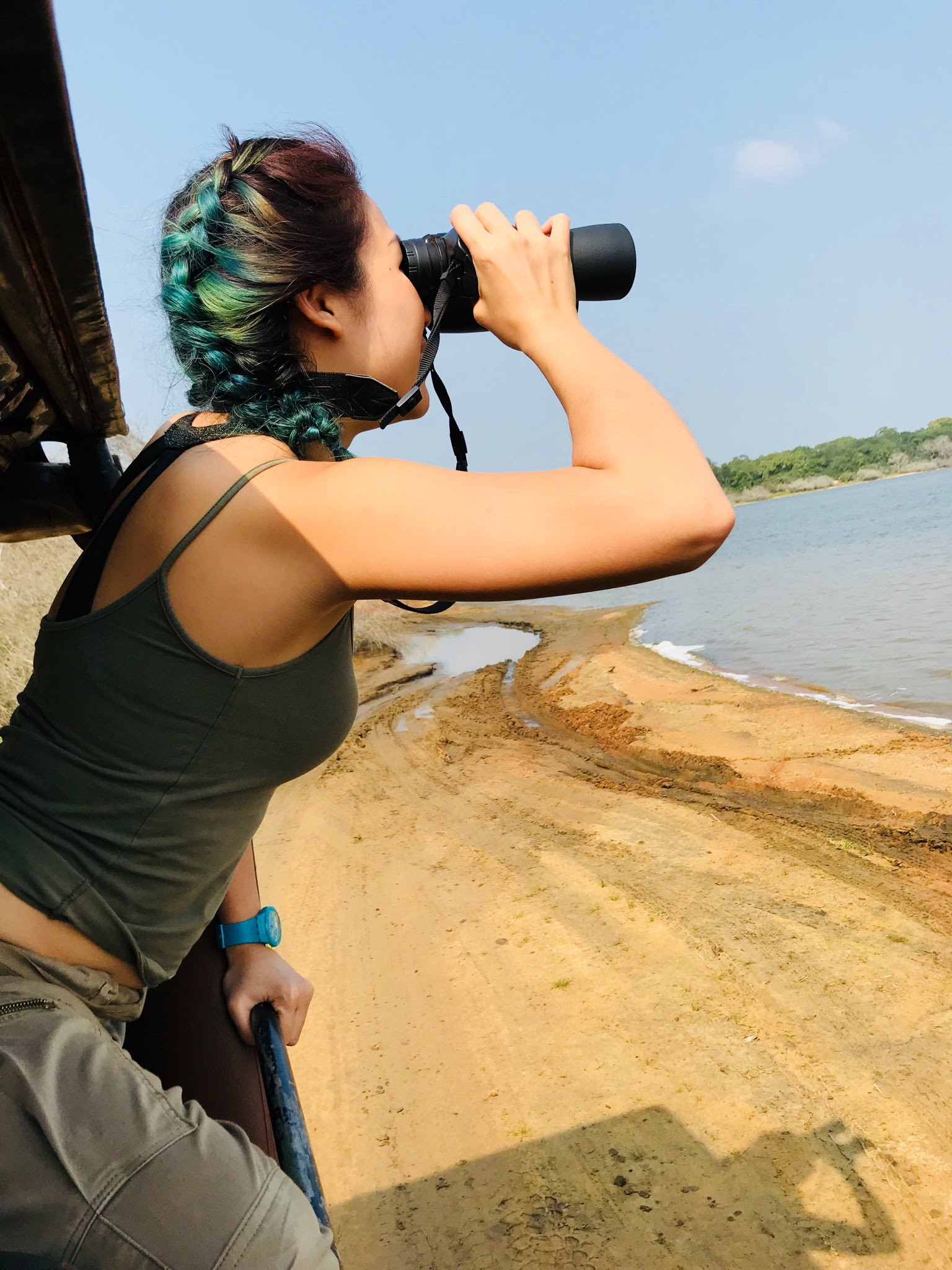 “A leopard does not change his spots, or change his feeling that spots are rather a credit.” – Ivy Compton-Burnett

Call me lucky. On a day trip to the richly rewarding and virtually wild, Wilpattu National Park in northern Sri Lanka, we watched a spotted feline up close and at length. Given the density of the forest and the skittishness of the denizens (Their forebears lived through a civil war, after all) seeing the iconic feline is never a sure thing, especially during the day.

Replete with sandy-shored villus – not, technically lakes, rather rain-fed depressions and the etymological source of ‘Wilpattu, the park is a haven for many animal species and paradise for birders. Barking deer, giant squirrels, jackals, mongoose, crocodiles, monkeys, and elephants, all, and many other species, call Wilpattu home. The likelihood of seeing at least some of these, even on a day-trip is high. Pack the binoculars to watch the 30+ species of birds feeding and bathing in the many villus.

For those wishing to explore the park on a more relaxed schedule, a good variety of hotels and guest houses lies just outside the park borders. Safaris camps offer luxury beneath canvas for those wishing to rough it in luxury (oxymoron alert!). Peeking out of the tent or taking a walk from the guest house after dark, you’ll discover that the park’s isolation provides remarkable night-scapes, but do be vigilant for the roaming denizens.

For twenty-five years (1983-2008) strolling crocs were rather a minor nuisance compared to the civil war that raged without surcease in the north and west of the island. Wilputta straddled the conflict zone. Caught in the cross fire, local inhabitants, human and animal, were mowed down, poached, and jerked around by the conflict. I’ll not enumerate the human death toll. Just say that even one innocent death is a tragedy, then multiply exponentially and sigh. In that time, exotic geographical names – Jaffna, Palampiddi, Chundikulam, Pallawarayankaddu, Wilpattu – were the wallpaper of war correspondence rather than travel brochures. If not struck by the stray bullet, many animals were poached for their valuable pelts and meat. This was war. A war that went on and on and on.

When it finally ended, the exhausted land and its inhabitants had a chance to breathe, breed, and tenuously restore their lives. The park visitor should at least be remotely aware of what came before, if for no other reason than to glory in the realisation that (as Yeats had it)  ‘peace comes dropping slow.’  Quote that to the delicate barking deer in the clutches of the comely leopard. Ah, life! Ah, death!

The wildlife has made a remarkable comeback. I imagine them raucously partying in 2009 when the park opened was again to visitors. The good news is that the animals and humans have caught their collective breath and life is returning to the jungly rural calm after the nightmare.

Less, in fact barely, affected by the civic troubles are parks to the south – notably Minneriya and Kaudulla. Both are wild and beautiful, if not as expansive and undiscovered as Wilpattu. Websites wrangle over which is the one to visit. Both are in the same neck of the Sri Lankan woods to the north, northwest of Colombo. The government established a protected corridor between the two in 2002 to accommodate the migratory habits of the beasts. By car, Minneriya is an hour nearer Colombo which may account for its heightened popularity.

I opted for the slightly farther and reportedly less crowded Kaudulla, a five and a half trip from the capital on decent roads with a fairly tame (not all are!) driver. I’m glad I did. OK, we weren’t the only visitors on jeep safari that day in January, but it wasn’t crowded. Not by a long shot. I wore Panama Jack boots with mock leopard-skin linings (de rigueur in Wilpattu, saucy in Kaudulla), and a khaki skirt under a green and gold print blouse. Crowning the Isak Dinesen look, I wound a turquoise scarf through my dark blue-highlighted hair. Um…where was I? Oh, yes, Kaudulla! Elephants! Rest assured, the multitudinous elephants didn’t give a collective pachyderm damn what I was wearing.

Later, when I had the chance to change clothes and shampoo, I realized what a dusty day I had had. Kaudulla more than Wilpattu has less floral growth, hence the elephants and jeeps compete to see which can stir up the most dust. For the chance to be in Sri Lanka cheek by jowl with animals seen nowhere else in such plenitude, a little dirt is a small price to pay. In fact, with a mental tweak here and there, it can become part of the experience, part of the challenge. Pack an extra ascot! Throw in the second scarf!

They roamed and foraged in plenitude. They are magnificent. They are intelligent. They are what travelers come to Kaudulla to see. Alas, they do not have a very efficient digestive system. On a good day (or any day, for that matter) they absorb a mere 40% of their food’s nutrients. Hence, the constant foraging and plenteous piles of poop – a dung beetle’s delight.

Jeeps are never far from the animals, who are accustomed to being stared at and photographed. Watching tons of wrinkled greyness eat, scuffle, and nuzzle is strangely peaceful and mesmerising. I could do it all day, but I couldn’t do it all day. I was on a day trip from Colombo where a delicious dinner and a cozy bed awaited.

If you have the time, Kaudulla is a good complement to Wilpattu. They are different enough to be worth the time and dirt. The former is more open and definitely more accessible to Colombo, most visitors’ base camp. The latter is more verdant, more ‘jungly’. Can only do one? I’d pick Wilpattu. Maybe it’s the back-story of war and struggle and the isolated environs, but there is a ‘out there’ romance to the place. If you, like me, are lucky enough to see a leopard or two you won’t soon forget that sinewy power clothed in opulent fur.

Jeeping around the parks, or on the way to and from, for that matter, wherever I looked, I saw birds. A bird watcher’s delight, Sri Lanka hosts 400+ species including migrants who have come from as far off as the arctic on well-earned package holidays to bask in the tropical warmth and taste the exotic insects. Between October and April the avian population is at its densest. January, February and March offer the best weather. From seashore to jungle and everywhere in between, the birds have found a welcoming environment in Sri Lanka. Tiny – Brown-capped Babbler. Gaudy – Flamingo. Colorful – Sri Lanka Jungle Fowl. Majestic – Pelican. A bit much – Indian Peafowl. Too darn cute – old World Flycatchers. Ravenous – White-bellied Sea Eagle. They are all here. Binoculars ready? Bird book in hand?

My adventure under the auspices of National Geographic Wild proved wildly surprising and eye-opening. When I conjured Sri Lanka before, I thought of beaches – they are accessible and lovely. Ancient ruins – Anuradhpura, Sigiriya, Kandy, and Yapahuwa to name a few. I realize now that, outside of Africa, Sri Lanka offers wildlife and adventure nonpareil. And, in my case, it’s only four hours from Singapore. Like those ancient travelers who happened on Sri Lanka (once called ‘Serendip’) I had my very own eponymous serendipity!

“— you don’t reach Serendib by plotting a course for it. You have to set out in good faith for elsewhere and lose your bearings … serendipitously.” (John Barth, The Last Voyage of  Somebody the Sailor)

We survived the wildlife. Fortunate enough to see a leopard and everything else. 🇱🇰🐘🐆
#natgeowild

After the 🐘 safari at Kaudulla National Park, I had a layer of road dust and a happy heart.