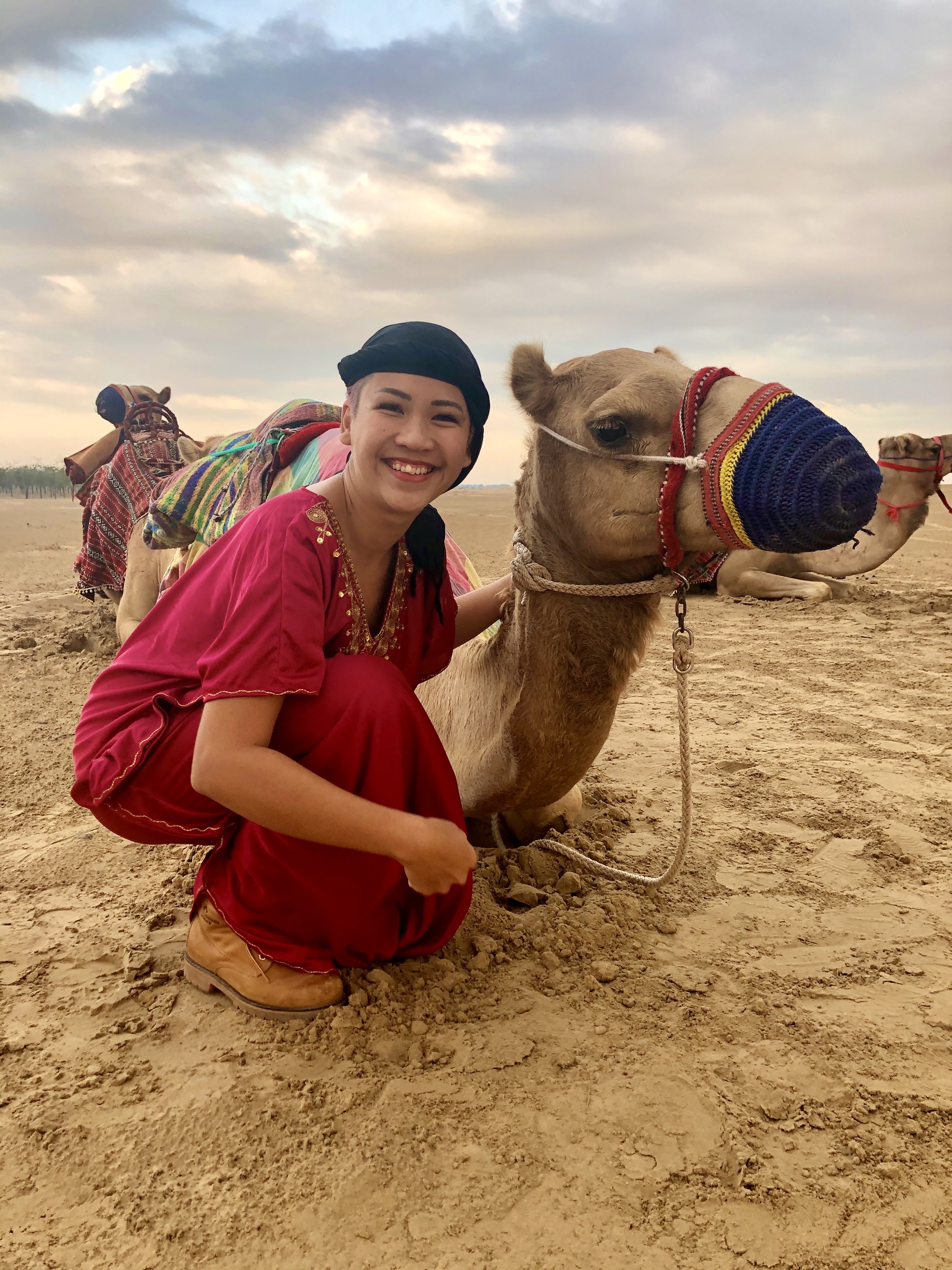 Janiqueel joins roams the desert and learns of Bedouin culture on a day trip to remember.

They did what they could, and no people were more self-reliant, but if things went wrong they accepted their fate without bitterness, and with dignity as the will of God.

Early on a bright, clear morning, we whisked away from the hotel leaving modern life behind. It didn’t take long. In a few minutes, we left the ultra-modern city behind and greeted the yellow sliver of dawn in the sandy expanse of the Al Marmoom Desert. Our camels – “Ships of the Desert” in ancient tales – patiently lounged on the cool sand as we approached. Amid the starkness of the desert terrain, the multi-colored saddle cloths were a comforting sight. Cautiously, I approached one friendly hump-backed fellow.  He seemed receptive to my advances. I put my arms around his neck and he nuzzled me. He nuzzled me! In space, if not in time, I was a long way from Dubai.

A camel-ride is a rolling rhythmic affair, it’s like sitting on the deck of a ship in a softly swelling sea. Our camels delivered us to a Bedouin village in the middle of nowhere – at least it seemed like that to this city-dweller. More colorful clothes had been laid in the sand to accommodate our traditional breakfast. Very soon, any trepidation about being in the middle of this vastness vanished amid the good cheer of our hosts and the tempting aromas of breakfast in the making. Offering a feast of tastes and textures, our king and accommodating hosts laid out a gustatory experience new to me and my fellow desert-rovers:

Oh My Goodness – it was tasty and satisfying. We had watched its preparation from lighting the fire to serving on traditional plates. That bread made on a flat skillet and garnished with honey was a highlight.

After a relaxing session where locals passed on tales of the desert, it was time to watch the skills of a falconer, see a desert-inspired traditional dance, visit the goats and other animals at the village farm, and soak up the special atmosphere of the Bedouin village. By the time we boarded our modern ships of the desert we had had a taste and a feel for the Al Marmoom Desert in particular and for the Arabian Desert as a whole.

Say hello to a camel and ride away.