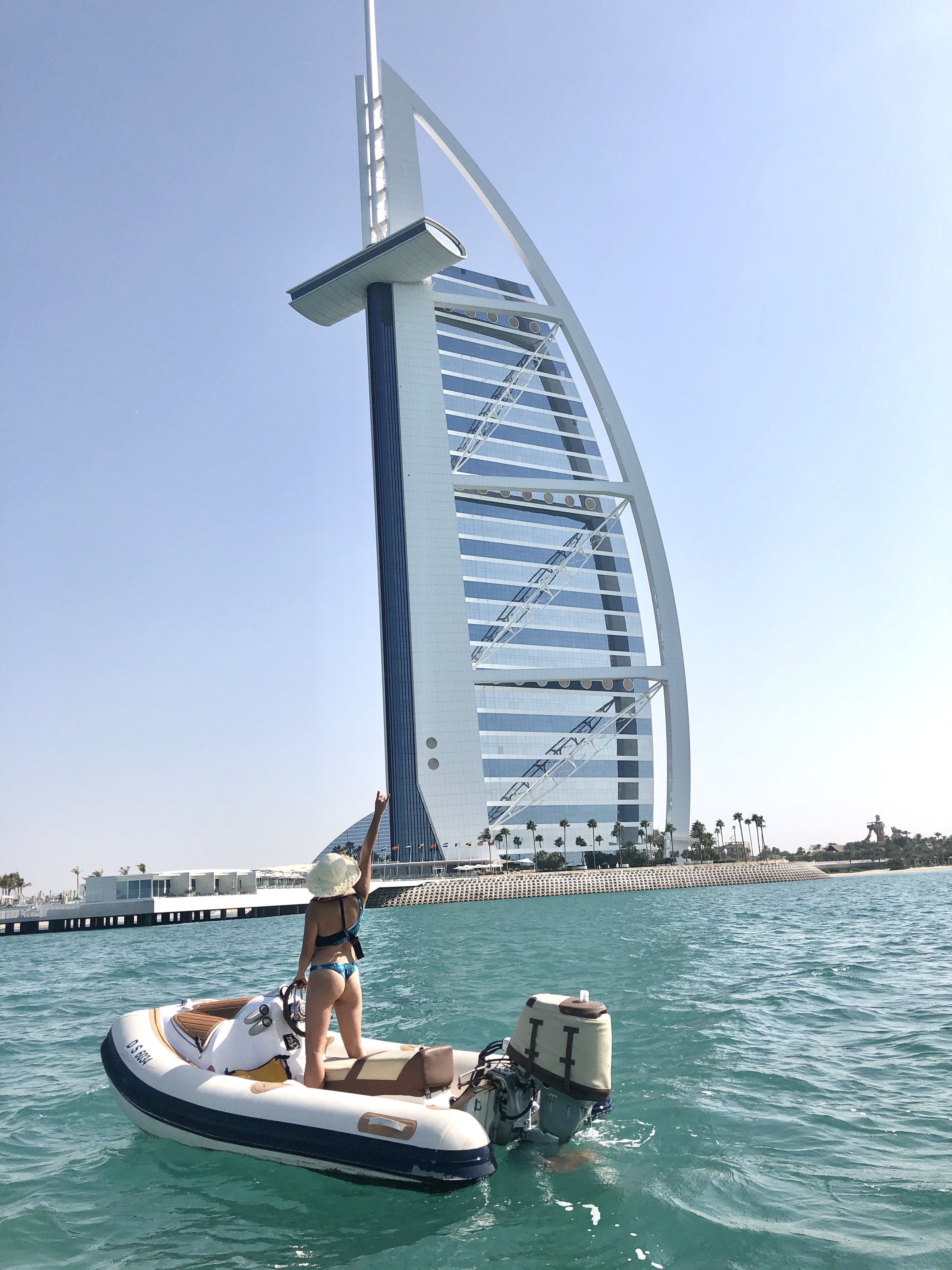 Janiqueel drives her own sporty craft along the exotic coast of Dubai.

I like Dubai because of the sheer scale on which the city is built. It is completely futuristic but with a warm, old-world ethos.

Ever so helpful, my guide, Brandon, may have been a bit leery when I confessed that I had never driven anything beyond the Police Car ride at the Mall – Mr. C’s favorite – but he didn’t show any hesitation. Calmly, he showed me the craft’s controls, fitted my life vest, explained some navigational basics, and we were OFF!

I felt comfortable with the boat from the get-go. A charming little craft built on inflatable pontoons and powered by an outboard motor, with a wooden deck –  this was floating fun. My boat and I were in a group, so I never felt trepidatious, even as we skimmed above the waters of the Persian Gulf. I was part of the Dubai Signature Boat Tour taking us along the city coastline. Almost immediately we passed Kite Beach, a wide, sweeping stretch of white sand with food trucks, kite surfers, kayaking, and volleyball. If I have the chance I want to go back and get into the action. First stop? Food truck, of course.

Looming in the near distance was the Burj Al Arab, Dubai’s signature seven-star hotel it’s striking architecture patterned after the sail of a dhow. Now one of Dubai’s oldest skyscrapers, it has remained the symbol of this desert nation. As I powered past the sight, I took a fleeting moment to reflect on where I was. I was driving (yes, I was driving!) a classy little boat on the Arabian Gulf gazing at a symbol of modern life in the Middle East. Twenty-four hours ago, I was floating above the Arabian Desert in a hot air balloon. I gave the Hero boat a bit more speed and I whooped. I WHOOPED!

As I zoomed past  Logo Islands, the Palm Jumeirah (the world’s largest man-made island), we saw another magnificent hotel icon of Dubai – Atlantis, The Palm.

90 minutes later and it was time to head for shore and return my boat to Brandon. I had that bittersweet feeling one gets when an adventure had been accomplished but now is done. As I had with my faithful balloon, I said farewell to my Hero Boat knowing I had done something like I had never done before.

I was driving in Dubai!