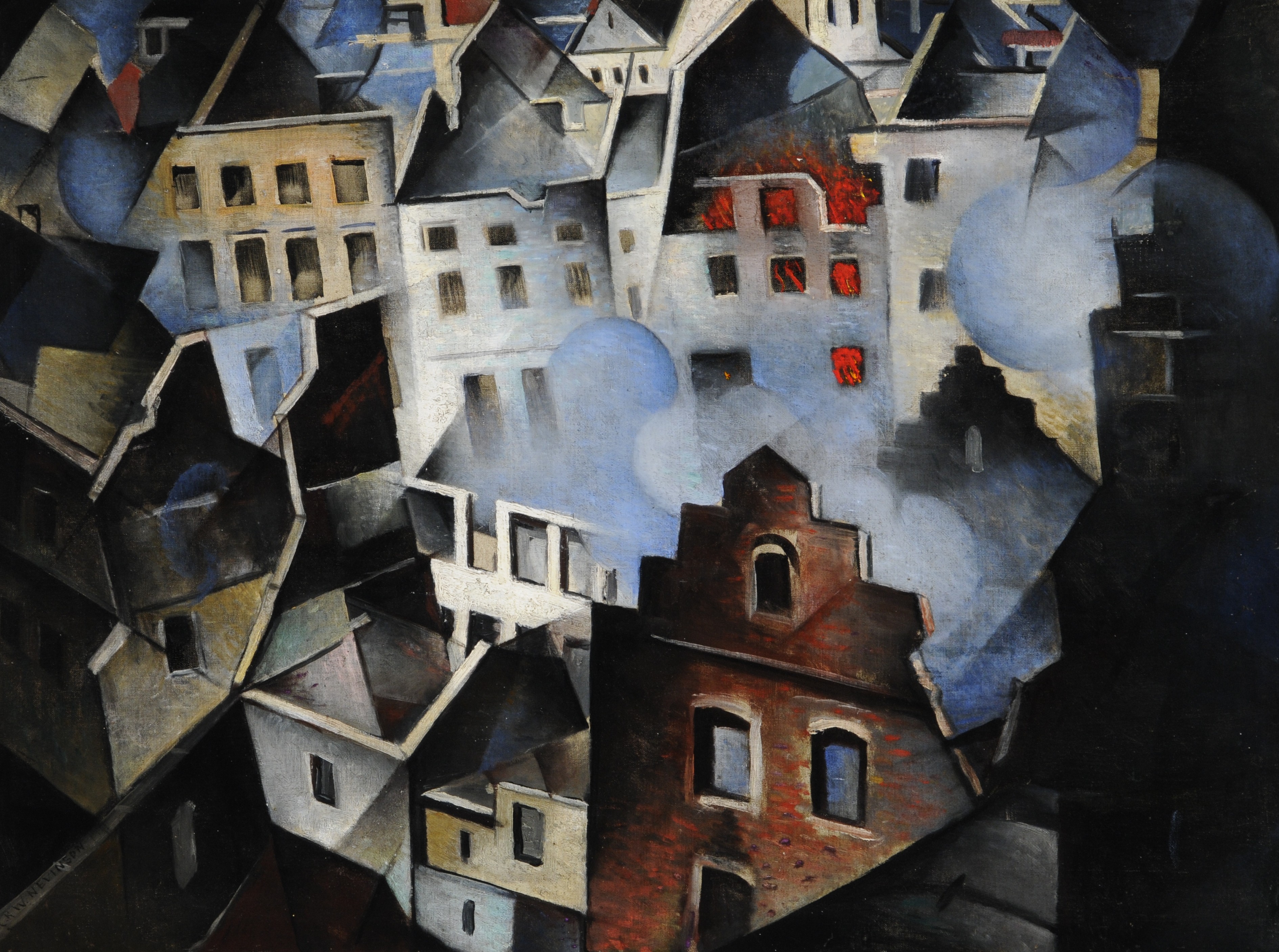 The air is loud with death,The dark air spurts with fireThe explosions ceaseless are.Timelessly now, some minutes past,These dead strode time with vigorous life,Till the shrapnel called ‘an end!’But not to all. In bleeding pangsSome borne on stretchers dreamed of home,Dear things, war-blotted from their hearts.

A simple square display case greets the visitor to Tate Britain’s “Aftermath.’ On its floor, three bunged-up helmets lie as if haphazardly dropped there. One French, one British, one German. Manufactured for a pop-gun war not the mechanized slaughter fields on which they were worn. Scattered across fields of battle, the abandoned helmets are a motif for many of the artists displayed on the walls of the exhibition’s first room.

Like the lads who donned them, the jaunty helmets spoke of other, more polite, battles from which one might have a fair chance of returning. Not World War One. Few returned unscathed. Like the nations they fought for, the soldiers were not to return ( if they returned at all) unscathed. England and Europe of the nineteenth century died on those sodden fields, as well. ‘Good-bye to All That’  wrote Robert Graves reflecting on a way of life, a culture, a world-view once so gloriously in brush and pen, now gone. As surely as the crumpled bodies lying next to the helmets. Helmets that couldn’t protect a damn thing, much less the head of a young man who would have rather shared a wee nip or two with his battlefield acquaintance, rather than blow his head off.

finds the survivors of the twentieth century’s first great conflagration, struggling to make some sense of the unmitigated rampage visited upon all it touched. Cenotaphs, like London’s, a stone’s throw from the exhibition, sought to memorialize the dead in the abstract. It, and the other memorials here, draw attention to the dead, the injured, the maimed, the broken. The Tate’s brochure points out that few official memorials depict soldiers a of color or foreign ethnicity. ‘Good-bye to All That?”

Away from the cenotaphs and tablets, alternate memorials bore witness. To see the soldiers’ broken bodies as memorials to and warnings against the folly of war is the business of this too. Kudos to the Tate Curators who recognised the power in depictions of the walking wounded . These are not pretty monuments. The wounds and the wounded are here. Less heroic in mufti, sans helmets, than in mud-splattered uniforms, but with more individual faces and clothing. And companions.

‘Traces of War: Dada and Surrealism’

Enter ‘Art in the Wake of World War One.’ Seeing senselessness and instability all soured, new artists and genres were awake. Here, the artworks are sharp and angular with, not often, a round helmet present. I found the collages most attractive and iconic. Probing the psychological wounds.

Often carried about, and voluminously reprinted, the folders became an interactive medium. Some focus on themes like ‘Mothers and Children.’ Some roam.

While Dada and Surrealism, evolved, Many artist were keen on realism. Classicism, landscapes, civilisation, pastorals – back to the future. Colourful and crammed with detail, the painting here are peaceful, soothing after what we’ve been through. Color is a relief from the first few rooms.

Germany. Socialism, ordinary lives and entertainments are the key here. Again, colorful and dynamic, but now with a point to it – a nascent social resentment.

Sharp, but sometimes shattering, the art here is edgy, yet hopeful. Celebrating modernism and progress, workers and machines march to the future, especially as seen in the USA. Color and light rehabilitate souls gone sour.