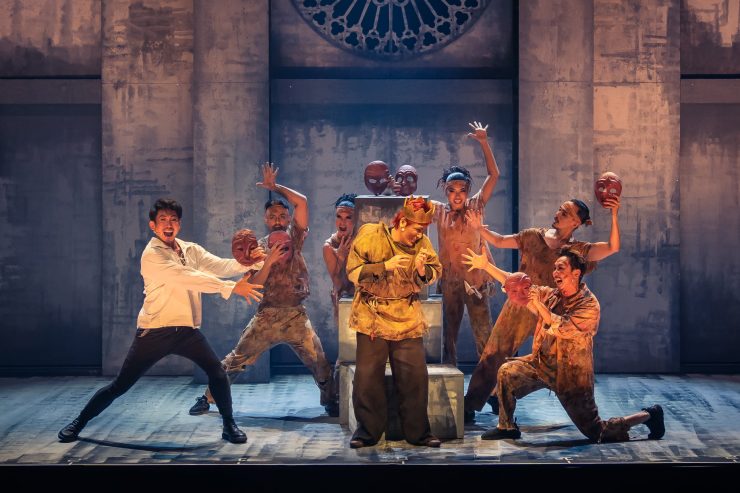 He found that man needs affection, that life without a warming love is but a dry wheel, creaking and grating as it turns.

On a beautiful spring evening on the banks of the Seine river in Paris – the unthinkable. Fire! The site, consecrated in 1189, had been the epicentre of war and peace, protest and calamity, revolution and revival, but never had the citizens of Paris seen orange flames silhouetted by the cerulean blue dusk sky, rising high above the roof, as high as the spire which was also aflame. Curtained by thick smoke, the two towers were obscured. No bells rang. The spirit of Quasimodo wept.

Now, three years after the catastrophe, reconstruction of the roof and spire continue apace due to be finished on another spring day in April 2024. In celebration, Alliance Française de Singapour will launch an exhibition, (RE)BIRTHS, on the history and significance and cultural reverberation of the cathedral. Providing more background, the Alliance Française will host a series of films, workshops, and presentations. For a deeper delve into the world of Notre Dame, the Alliance library is highlighting a selection of relevant books and authors In conjunction with the exhibition.

From 15 to 24 April, Quasimodo a Musical Story will transform the stage into scenes from nineteenth-century Paris. Toiling as a bell-ringer in a tower of the Notre Dame Cathedral, Quasimodo is a lonely teenager with a deformity deafened by years of ringing the giant bells every hour. From high atop his perch, he spots the beautiful Esmeralda, a street dancer, and falls instantly in love with her beauty and grace. Alas, it is a love doomed by circumstance. With his slouched posture and physical deformities, Quasimodo is hardly a heartthrob. Her love for the handsome soldier, Captain Phoebus, adds yet another complication to the tangled web of emotions. Played out against the backdrop of injustice and hypocrisy of long-ago Paris, the story has universal relevance even today. Even in far-off Singapore.

With a cast built from established actors and new faces, complemented by energetic physically-demanding dancing, the performance is lively, fast and kinetic, thanks to the inspiring creativity of Director Nathalie Durot Ribette who found a path to tell Hugo’s familiar story in a brand new way. Elaine Chan, Musical Director, added to the story with her compelling workings of a complicated, sophisticated score. The poignant story and emotional themes produce a depth of feeling worthy of the full-dimensional characters. Suitable for any age, the show is a full-family affair.

On opening night, three years to the day after the calamitous fire at Notre Dame, the capacity audience found their seats in the Alliance Française Theatre. The anticipation was palpable. For the first time in COVID years, seating restrictions were off. Soon, every seat would be full. The buzz of excitement filled the air until the lights dimmed, the announcer gave her messages, and a hush enveloped the theatre. This was to be a very special night for theatre in Singapore. Dim until now, the stained glass rose window high above the stage floor gradually glowed. The show was ON.

To set the scene and provide exposition, characters Gringoire (George Chan) and Clopin (Hossan Leong) launched the evening with the first song. Immediately, it was clear that we in the audience were here for an evening of musical drama of the first order.

As cast members shared the stage and the plot thickened, George Chan’s choreography ensured that all parts of the stage – set designed by Wong Chee Wai – were utilized to create a moving, breathing whole. Action met mood as lights (Tai Zi Feng) and sound (Shah Tahir). Working in concert, the creative team seamlessly presented a breath-taking production. Throughout, I had to remind myself that this was a relatively small stage. On this night, through the magid of the creators, it had become a cathedral.

As the characters moved up and down ladders, in and out of doors on various levels, and on and off the stage, the story of Quasimodo unfolded. Alas, it is a tragic tale of inner struggle, arrogant disdain, and quiet heroism. Brought to life by actor, Joash Zheng, Quasimodo is a figure of physical weakness and inner strength. He falls in love with the street dancer, Esmeralda (Vannesa Kee). Another plot of love swirls and twines around the haughty Fleur-De-Lys (Gabrielle Rae Sammy) and the handsome, conflicted Phoebus (Preston Lim). Spoiler alert: a happy ending is not to be.

To watch this sad tale play itself out through brilliant stagecraft and superb acting, was indeed a drama experience to be relished. To know that the terribly damaged Notre Dame was nearing complete refurbishment and that we could gather as a whole audience, was, like the love of Esmeralda and Quasimodo, a spark of hope.

Tickets for QUASIMODO are available through SISTIC: