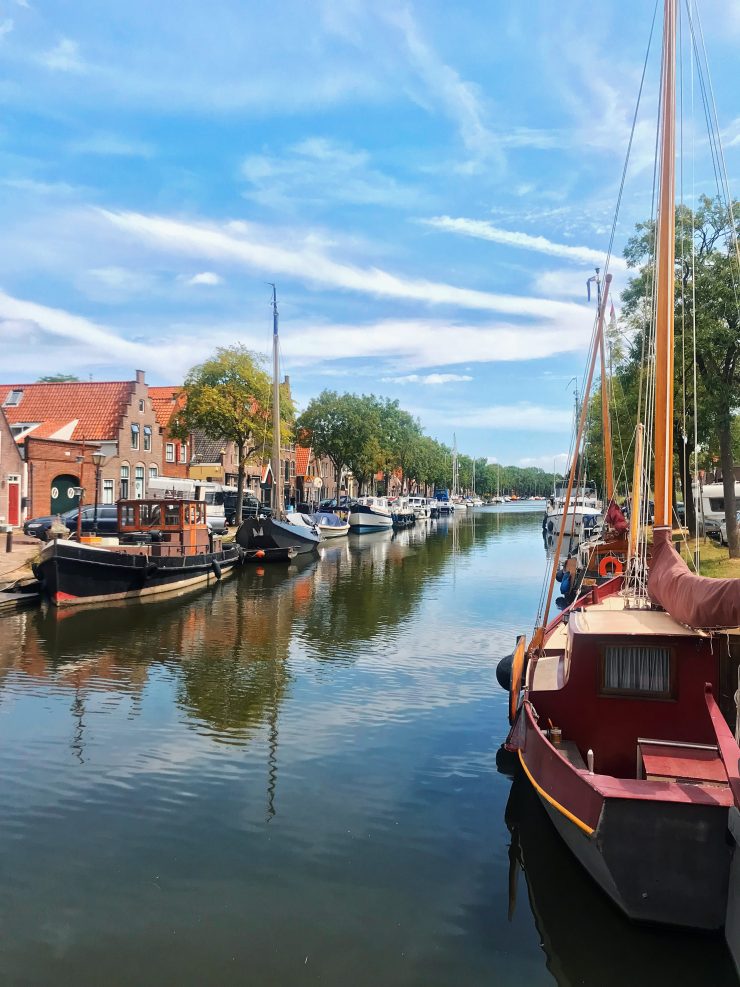 An idyllic place that seems to be enchanted! So many different places to see and visit, all wrapped in a beautiful picturesque aura. A place where there are three times as many bicycles as there are cars! The official name is the Kingdom of the Netherlands. Its government is still regime by a Monarchy, and it is located between Belgium and Germany in Western Europe.

It is also surrounded by canals, dams, dikes, and pumping stations to keep the North Seas and rivers back so they wouldn’t wash it away.

The Netherlands means “low countries”, although tourism is an important topic to the country, and has so many visitors, their major industry is Tulips. The Netherlands produces billions of bulbs a year. It is the most densely populated country in the European country, so the government has created sanctuaries to allow plants, birds, and small animals to thrive.

It is also unique for having the highest concentration of museums in the world!

So, with this powerful introduction to this amazing country, it is a pleasure to show you “The Ultimate Top 50 Things to Do in the Netherlands”:

The Canals of Amsterdam:

Explore the idyllic routes by taking a boat or a water taxi while enjoying them.

Visit a back in time experience of the 17th and 18th centuries. Styled as an open-air museum. You can find out how ancients and craftsmen would have worked. Also, there are beautiful windmills.

The Garden of Europe:

Stroll around this riot of color with blooms of every hue as far as you can see.

Admire the large church built from red brick in a Gothic style, containing 51 bells, an ornate wooden pulpit, and a huge pipe organ.

Visit the Dutch National Museum filled with an amazing collection of art and antiques.

Explore the largest and most famous park with exhibits, sculpture park, graceful dunes, and a spot for a whole range of animal species.

Visit and admire one of the most famous attractions, which is also the former home of Anne Frank.

Enjoy this little village, known for being one of the prettiest spots, with traditional painted wooden houses and fishing boats, and their summer festivals.

Have fun at the biggest amusement park, divided up into different zones focusing on a different ancient myth or legend, known for being one f the oldest theme parks in the world.

Take a trip to this mini version of the Netherlands on an actual scale, which includes cute windmills, cars, main landmarks, and decorative features like bridges.

Visit and enjoy the scenic location on the River Nord, the Village of Kinderdijk which means “Children’s Dike”. Considered a UNESCO World Heritage Site Windmill place.

Take in the art and ode to one of the greatest artists ever to live. Voted as one of the best museums in the world. Houses 200 beautiful paintings, 500 drawings, and 700 letters.

Have the actual Heineken experience with a beer and learn about how this famous beer evolved the Heineken family and the actual brewing process.

Explore one of the premium art galleries and known for its vast collection of Dutch and Flemish paintings. Filled with over 800 works of art.

Visit this historic town which is the owner of the hilltop castle from the 20th century. You can take in spas and caves as well as the Christmas Market.

Go and meet the animals in the oldest zoo in the Netherlands having more than 35 acres and 900 different species of animals. Also, an aquarium section that features diverse species like sharks, eel, and tropical fish.

Sample some cheese here which is famous around the world for its red-hued ring, taste, and round shape. This town is located on the water, and a singular attraction includes a large cheese market and a famous cheese-weighing hall.

Explore this area, it is covered in little islands and coves. Most sit below sea level.

Visit this hall covered in cobbles dating from the 13th century. Also, the spot where the Opening Parliament ceremony is conducted every year.

Journey to a great trip in a small fishing village, full of traditional delights, such as wooden houses, clogs, and scenic landscapes.

Enjoy one of the quirkiest museums which sit on the water on one of its pretty canals, furnished to give you a glimpse of how people have lived on these houseboats over the years.

Visit the oldest port in which you will find a huge number of attractions such as charming eateries and cafes as well as a selection of ancient sailing ships that give a nod to the maritime history of this city.

Travel to this cute town and make a great trip. Main sights such as the Town Hall and the famous Nieuwe Kerk which has a tall tower to climb and to look out over. Other attractions are the Technology Museum and the Mark which is the main traditional market.

Explore the largest fortification with a stunning castle that sprawls across a 250-acre park and where you will find a wide collection of paintings, textiles, antiques, and furniture.

one of the most popular and old zoos. Many attractions to visit as; Oceanium, African Gorilla Island, Crocodile River, Taman Indah, and Ice Cave.

A beautiful protected dune that features picturesque walking trails and fun activities for the whole family to enjoy; such as guided tours, bird watching, carriage rides, and many more.

A unique wildlife zoo that houses, cares, and protects around 1,250 animals. Its popular car safari makes it a unique experience.

Is the largest flower garden. 7 million flower bulbs are planted each year inside the park. Also hosts a variety of events. Shows, tours, exhibits, and more during this period.

A theme park that features various attractions for the entire family to enjoy an entire day!

A swimming pool complex that features both recreational and competition pools.

A museum of modern and contemporary art. Its collection is composed of work from the 20th and 21st centuries.

It is a branch of the famed London wax museum located in the heart of Amsterdam.

A nature reserve covering 55 square kilometers of dunes, forests, and heathlands. Also, two museums are located inside the park which houses the work of Picasso, Van Gogh, and Roding, and the other focuses on the biology and geology of the Veluwe.

A park that features a variety of thrill rides and family-oriented attractions.

An interactive park that features historical homes, farms, and workshops used in everyday life in the Netherlands.

An indoor and ski complex that offers everything from two ski slopes to several restaurants, terraces, conference rooms, and more.

An amusement park with over sixty different attractions, impossible to be bored of.

Features the last great Dutch “ ship of state”, was retired to Rotterdam and is now a combination of hotel/museum.

It is a national heritage site of the Netherlands that greatly accentuates the unique Baroque architectural style of the 17th century.

A satellite museum of the great Hermitage Museum located in Russia. Housing two exuberant exhibitions, Expedition Silk Road and Dining with the Tsars.

So, as you can appreciate, the Netherlands is a place that offers you everything to enjoy with or without the family. Amazing and unique attractions that offer you all possibilities. Take the ride and enjoy! Every single place and moment will become an outstanding experience that can come true in a very on top… “low country”!