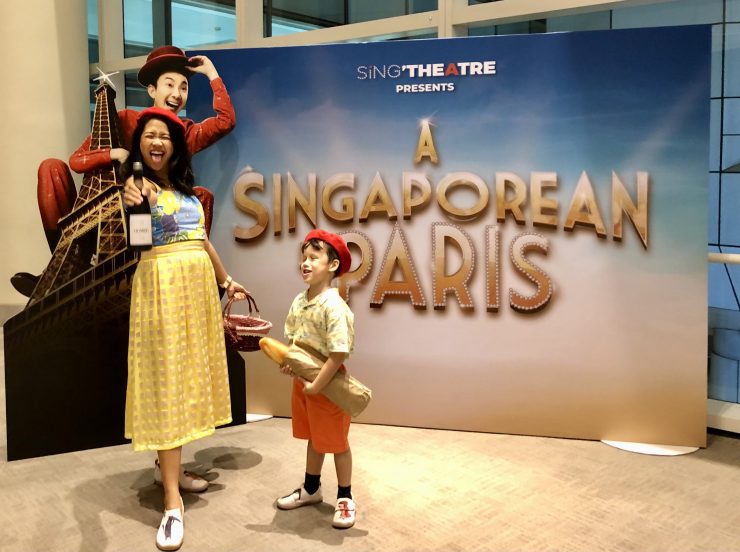 Back for a three-peat, ‘A Singaporean in Paris’

If you are lucky enough to have lived in Paris as a young man, then wherever you go for the rest of your life it stays with you, for Paris is a moveable feast.

Perhaps you saw ‘A Singaporean in Paris’ on stage in 2010 or 2014. Maybe you saw them both. Janiqueel’s advice: See it again in 2022.  As part of  “Voilah France Singapore Festival 2022”, Sing’theatre reprises its sold-out stage romp with new songs and an updated script to bring the joie de vivre of the City of Light to our Garden City.

No stranger to the performing arts in Singapore, Sing’Theatre has been at the forefront of popular productions since 2006 when Nathalie Ribette left her native France, moved to Singapore, and transplanted her devotion to the performing arts eventually becoming part of the founding of Sing’Theatre where “Performing for a better society” is the mantra realised through community outreach, a performance academy, and a myriad of productions, many of which capitalise on her French connection and sensibility through plays such as “A French Kiss in Singapore”, “Quasimodo”, “La Vie En Rose”, “No Regrets”, “Jacques Brel is Alive and Well and Living in Paris”, “Take Me Along”, and “Molière et Moi” among others.

Given that background, a revival of ‘A Singaporean in Paris’ seemed virtually inevitable. And here it is to brighten a new theatrical season. And take us along on a musical journey. Based on interviews with Singaporeans who lived, or have lived, in Paris, the musical portrays the pains as well as the pleasures of living in a European capital. It is a glimpse of the real Paris, with its challenges and pitfalls as well as its luminous rewards.

With a cabaret-like ambience, the musical will leave the audience with heads full of French chanson songs like “My Way”, “She”, “What Now My Love”, and “Sea, Sex and Sun”, to name a few. As well as directing, Hossan Leong joins the cast for his acting and singing debut with Sing’Theatre. Behind the scenes, the choreographer George Chan weaves dance moves to the musical arrangements of Elaine Chan. Writer Alison Jean Lester uses a 10-year residence in Paris to imbue the script with authentic experiences of the city to bring to life a Paris (sometimes gritty, sometimes, uncomfortable) that is seldom seen on stage. Actors Peter Ong, Ethel Yap, Gabrielle Rae Sammy and Amin Alifin rollick and romp to bring the essence of an authentic French experience to the National Library Drama Centre Theatre in early November.

“Voilah! France Singapore Festival 2022” is devoted to celebrating the enduring artistic relationship between France and Singapore. Of course, ‘A Singaporean in Paris’ is one of the highlights, but there is a panoply of other visual, written, and graphic offerings in the month-long pageant.

Please join the cast and crew as they navigate and bring to life the complex expat experience of life in Singapore and PARIS!

A SINGAPOREAN IN PARIS is part of “Voilah France Singapore Festival 2022” and will run from 2 to 13 November 2022 at Drama Centre (National Library).

Get your tickets on Sistic now!