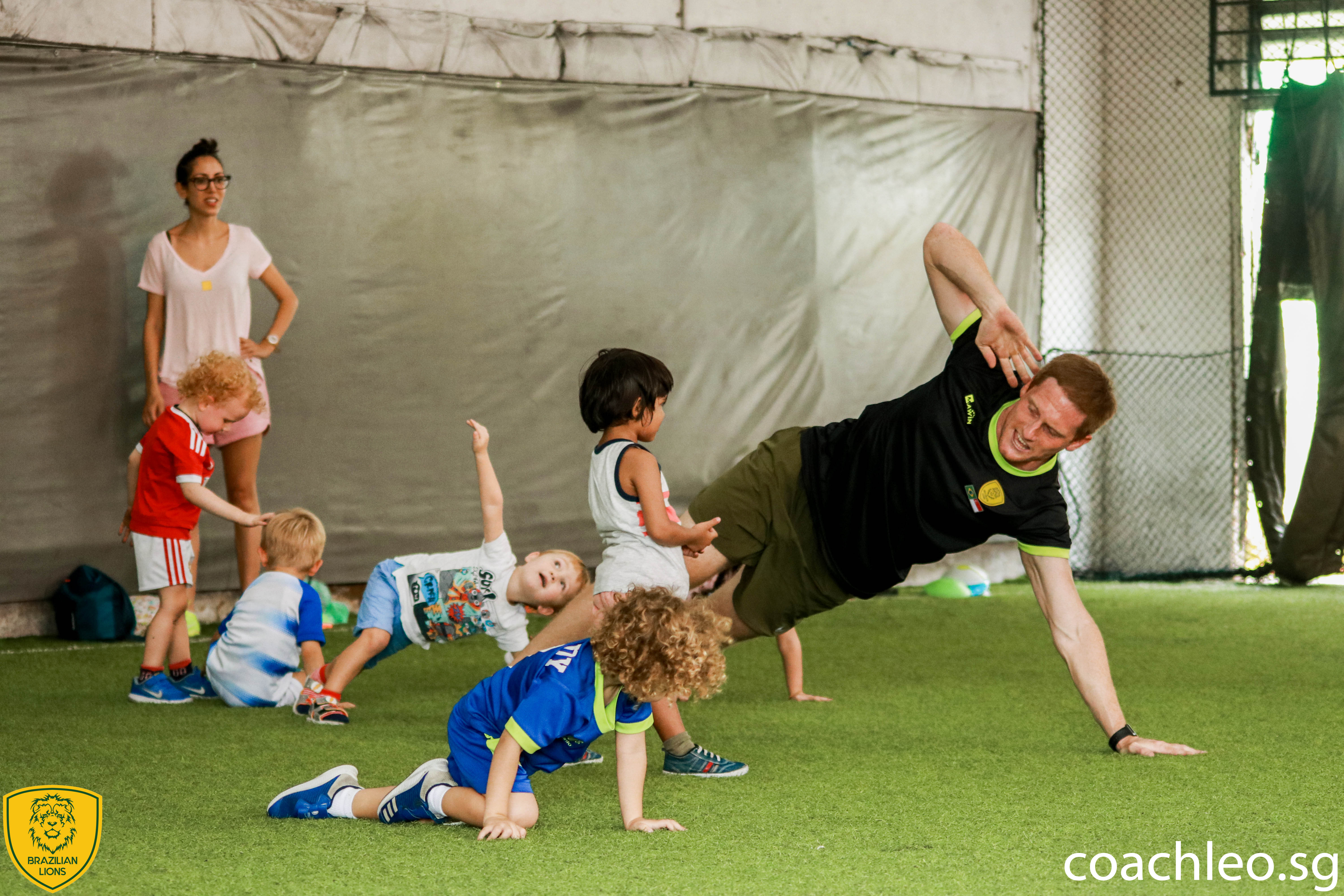 Mr. C and Janiqueel practice football with a Brazilian flair.

“I learned all about life with a ball at my feet”

Not yet two (birthday is coming soon — watch this space!), Mr. C has gotten the hang of kicking the soccer ball into a pint-sized goal. As the Official Child of janiqueel.com, he is under some public pressure to succeed for his avid fan base. He does! Into the goal rolls the ball, up goes the tot’s arms, in the eyes of his doting mom, pride glows. Each Saturday morning I transform into “Soccer Mom” – a fixture on the sidelines cheering at the Cage in Kallang and smiling as the football prodigy has fun and learns the elegant game. Had you been one of the parent-fans of late, you would have noticed that I was there as usual, but clad in a cast covering my left knee. Had I popped the joint in an all-out goal-saving dive for a women’s football team, I would have had a pertinent tale to tale for this article on Coach Leo.

In an age in which #kids get hooked on #video and computer #games, and #childhood obesity is on a rise, how can getting them #running around with other kids be a bad thing? ⚽️🥅 @coachleosg #23monthsold

Alas, the story lies not on a football pitch but on a dancefloor, in a pub, on a cruise. It’s still a pretty good story, even without a ball, a goal, or a miracle save. For the full tale, see Cruising the Straits with Royal Caribbean

Unlike mine, Coach Leo’s knees are in perfect shape as one might expect from a Brazilian footballer who grew up with the sport. He brought his expertise and love of the game to Singapore in 2013. Here, he established a program to bring the thrill of the game to youngsters here in the Garden city. “We aim to recreate the passion children all over Brazil feel as they learn to play futsal. We want to give them a taste of the uniqueness of this style of play as they develop their creativity, style, and ginga.” I had to look up “ginga”. My friend, Mr. Google explains that it, “signifies a cool way of moving, freely and loosely.” I like that as part of the mission of Coach Leo and his team. Not only are they teaching the basics of the game, but they are adding style, eloquence, and attitude to the lessons.

The playgroup is for kids from 2-5 years of age. Yes, Mr. C is a bit younger than that, but, we are talking “prodigy,” remember? Girls and boys play together as to Singaporeans and international kids. Socialization is a given for young players and parents, too. As the players grow older and more competitive, classes and coaches cater to individual skills. Private skill-building is available for any age.

The Brazilian Lions team training and match play is the culmination of Coach Leo’s programme. There are four teams for different ages, each with a schedule of practices and match play. And uniforms. And trophies. Again, I appreciate the philosophy behind the experience. “We never push students harder than they are capable of, and realize that players of all abilities can play an important part of any team, as it is not skill alone that determines how successful a player can be.”

One thought on “Game Goals and Ginga Coach Leo”